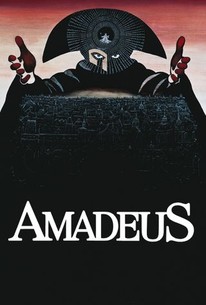 Critics Consensus: A lavish, entertaining, powerful film about the life and influence, both positive and negative, of one of Western culture's great artists.

Critics Consensus: A lavish, entertaining, powerful film about the life and influence, both positive and negative, of one of Western culture's great artists.

Critic Consensus: A lavish, entertaining, powerful film about the life and influence, both positive and negative, of one of Western culture's great artists.

For this film adaptation of Peter Shaffer's Broadway hit, director Milos Forman returned to the city of Prague that he'd left behind during the Czech political crises of 1968, bringing along his usual cinematographer and fellow Czech expatriate, Miroslav Ondrícek. Amadeus is an expansion of a Viennese "urban legend" concerning the death of 18th century musical genius Wolfgang Amadeus Mozart. From the vantage point of an insane asylum, aging royal composer Salieri (F. Murray Abraham) recalls the events of three decades earlier, when the young Mozart (Tom Hulce) first gained favor in the court of Austrian emperor Joseph II (Jeffrey Jones). Salieri was incensed that God would bless so vulgar and obnoxious a young snipe as Mozart with divine genius. Why was Salieri -- so disciplined, so devoted to his art, and so willing to toady to his superiors -- not touched by God? Unable to match Mozart's talent, Salieri uses his influence in court to sabotage the young upstart's career. Disguising himself as a mysterious benefactor, Salieri commissions the backbreaking Requiem, which eventually costs Mozart his health, wealth, and life. Among the film's many pearls of dialogue, the best line goes to the emperor, who rejects a Mozart composition on the grounds that it has "too many notes." Amadeus won eight Academy Awards, including Best Picture, Best Director, Best Adapted Screenplay, and Best Actor for F. Murray Abraham. In 2002, the film received a theatrical re-release as "Amadeus: The Director's Cut," a version that includes 20 minutes of additional footage. ~ Hal Erickson, Rovi

Amadeus isn't meant to be a biography of the composer's life, but a bawdy, black fantasy, a fiction based on a few curious facts. Peter Shaffer adapted the screenplay from his own stage play: What was intimate is now opulent.

A substantial achievement -- and graced by an uncommonly distinguished score.

What starts as an absorbing study of historical characters and situations ends as just another elaborate and over-long Hollywood style costume-piece.

The skill of Amadeus is in making you sympathize with Salieri, as slimy and despicable as he is, because of his flaws. He appeals to your sense of democracy, even though you know that talent -- certainly genius -- isn't parceled out democratically.

[Forman's] is a genuine adaptation, not only because the play is permitted to stretch its legs beyond the pop-up book confines of a proscenium arch, but because he has leavened its High Art pretensions with a dash of showbiz raciness.

Amadeus is not only one of the best films made about professional jealousy and classical music, it's also - rather uniquely - a young person's movie.

...a case study for the theological notion of common grace.

From the first few seconds of the film, it's evident that the music will guide it to cinematic perfection.

Amadeus is a film of high accolade...this film is grand on every level and I'm glad to have experienced it.

The film's awesome achievements will remind audiences how rich and challenging a cinematic experience can be.

Impeccably directed, with a wonderful art direction, an outstanding cinematography and an unforgettable performance by Abraham as the envious Salieri - the true protagonist of the story -, this is a splendid masterpiece that must definitely be seen in its three-hour director's cut.

By bouts hilariously witty, nerve-wrackingly tense and profoundly moving, all the while beautifully shot and thoughtfully put together. An astounding achievement. Full review later.