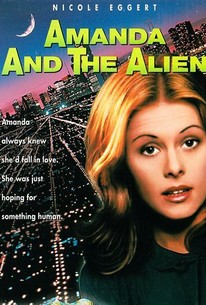 They say that men are from Mars, but one woman finds happiness when her boyfriend is taken over by visitors from another part of the galaxy in this sexy sci-fi comedy. Amanda (Nicole Eggert) is an aspiring artist who supports herself working at a clothing store; she doesn't care for her job, and her boyfriend Charlie (Michael Bendetti) is chronically unfaithful to her. A pair of government agents, Emmitt (Stacy Keach) and Vint (Michael Dorn), have captured a space alien and are guarding it in a secret safe house; however, the alien escapes, and takes over the body of Flores (Alex Maneses), a woman working as a domestic at the house. Amanda meets "Flores" in a coffeehouse and realizes that the runaway alien lurks within; sympathetic to the space creature's plight, she offers to help it escape, and even gives it a new body to travel in -- Charlie's, which suddenly makes him a lot easier to get along with, and even a bit sexier. Onetime scandal queen Jessica Hahn makes a cameo appearance as the host of a TV show.

Liz Johnson
as Thelma
View All

Critic Reviews for Amanda & the Alien

There are no critic reviews yet for Amanda & the Alien. Keep checking Rotten Tomatoes for updates!

Audience Reviews for Amanda & the Alien

There are no featured audience reviews yet. Click the link below to see what others say about Amanda & the Alien!