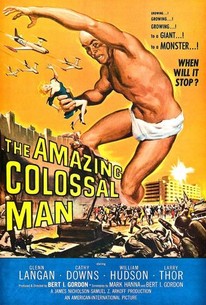 While overseeing the atomic tests in the Nevada desert, Army colonel Glenn Manning (Glenn Langan) is exposed to extensive amounts of radiation. As a result, Manning grows, and grows, and grows, at the rate of ten feet per day. This sudden height gain adversely affects the poor man's mind, and soon he's as mad as a hatter. Looking for all the world like Mr. Clean in a diaper, the Colossal Man goes on a murderous rampage, laying waste to numerous landmarks.

Jean Moorhead
as Girl in Bath

Diane Robin
as Nurse
View All

While Langan's work as the mentally unraveling colossal man is impressive, there's little else here save for genre bric-a-brac.

What the film failed to do, was be anything but cynical.

A nice B movie that runs in similar vein as King Kong. Given that it had a low budget, it was quite well done.