Amazing Journey: The Story of The Who2007 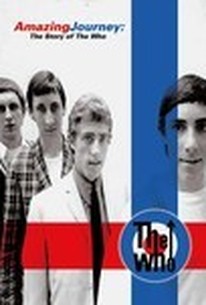 Amazing Journey: The Story of The Who Photos

Oscar-winning filmmaker Murray Lerner and co-director Paul Crowder draw on the essential themes of The Who's music and lyrics to craft a definitive audio-visual document of the influential band's timeless legacy. From their origins as a 1960s R&B cover band to their transformation into the band that changed the course of rock and roll history, Pete Townshend, Roger Daltrey, Keith Moon, and John Entwistle's unstoppable, arena shaking juggernaut is followed as the men behind the music experience triumph and tragedy over the course of the following decades. Authorized by the band, the film speaks with family and friends to explore the meteoric rise of The Who as unreleased performance footage from Monterey, Woodstock, The Concert for NYC and other landmark concerts show fans the scenes that, until this release, they have only been able to read about. ~ Jason Buchanan, Rovi

Paul Crowder
as Narrator
View All

Critic Reviews for Amazing Journey: The Story of The Who

An enjoyable enough primer that it may nurture fans to support the rockers in their old age.

It's all here, from the exploding drum kit on The Smothers Brothers Comedy Hour in 1967 to the trampling deaths at the band's 1979 Cincinnati gig.

In the end, "The Kids are Alright" is still the superior documentary on the madness of The Who, but Crowder's story of the loudest band in the world is in its own right a fantastic exploration...

The documentary is straightforward in its chronology, and plump with concert footage

Audience Reviews for Amazing Journey: The Story of The Who

Had the Amazing Journey box set for christmas and haven't had the chance to watch it yet. Luckily I got the chance today and loved every minute of it. Being a Who fan, this review made me slightly biased but this documentry give me extra insight into the careers of the 4 members, which I might not have known before. For instance someone of my generation "no pun intended" my only have heard of them through teh CSI songs, which is slightly irritating. This documentry manges to cram most things into the 2 hr running time. My only objection is that it didn't cover Quadrophenia. The band went through some rough times, which is stated in the film. From the deaths of Keith Moon, John Entsiwtsle and the often violent arguments Roger Daltrey and Pete Townsend. What I found interesting was that Pete Towsend wrote most of the songs and Daltry wasn't necessarily the core of the band. Pete Towsend also wrote the two films Tommy and Quadophenia. This documentry is well constructed and gives all the insight you need into the band without trying to cram it all in. It also features some unseen footage from the days of the '60's to behind the scenes footage at gigs. Overall a highly recomnded rock documentry to all rock fans....well worth the wait!

Amazing Journey: The Story of The Who Quotes