Amazon Women on the Moon1987 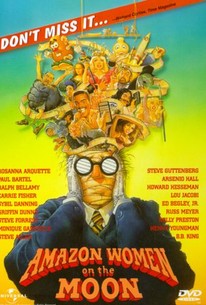 Amazon Women on the Moon Photos

The 1987 portmanteau comedy feature Amazon Women on the Moon lampoons several film genres in general and the 1954 sci-fi cheapie Cat Women of the Moon in particular. Other sketches in Amazon Women include an opening bit with Arsenio Hall; a vignette titled "Son of the Invisible Man" wherein a naked Ed Begley Jr. runs around in full view of the nonplussed supporting cast; the It's Alive parody "Hospital", which offers the spectacle of Michelle Pfeiffer giving birth to Mr. Potato Head; and a Siskel & Ebert takeoff, featuring Arche Hahn as a TV viewer whose entire life is given a "thumbs down." Directed by several hands, including Joe Dante, Carl Gottleib, Peter Horton, John Landis, and Robert K. Weiss, Amazon Women on the Moon also features a satire of the Kroger G. Babb school of "sex hygiene" exploitation cheapies, with syphilis victim Carrie Fisher being counseled by unctuous doctor Paul Bartel. ~ Hal Erickson, Rovi

Henny Youngman
as Himself

Rip Taylor
as Himself

B.B. King
as Himself

Lana Clarkson
as Alpha Beta ("Amazon Women on the Moon")

Sarah Lilly
as Prostitute ("Bullshit or Not")

Henry Silva
as Himself

Charlie Callas
as Himself

Bryan Cranston
as "Roast Your Loved One" - Paramedic #1

Robert Picardo
as Rick Raddnitz ("Roast Your Loved One")

Slappy White
as Himself ("Roast Your Loved One")

Jackie Vernon
as Himself ("Roast Your Loved One")

Chuck Lafont
as Trent ("Son of the Invisible Man")

Larry Hankin
as Man in Pub ("Son of the Invisible Man")

Garry Goodrow
as Checker Player ("Son of the Invisible Man")

Terry McGovern
as Salesman ("First Lady of the Evening")

Critic Reviews for Amazon Women on the Moon

Amazon Women on the Moon is irreverent, vulgar and silly and has some hilarious moments and some real groaners too.

An anarchic, often hilarious adventure in dial-spinning, a collection of brief skits and wacko parodies that are sometimes quite clever, though they're just as often happily sophomoric, too.

Satirists are in trouble when their subjects are funnier than they are.

There appears to be a running, eerily prophetic theme in Amazon, as most of the skits deal with how advancements in technology - particularly television and home video - often sabotage our lives.

Hit-and-miss. The best skit features Ed Begley Jr. as the son of the Invisible Man.

A lot of the scenes are stylishly spot-on but don't appear to have the same comedic impact as they did back in the day.

There is, amid the frat-basement scheme, a thesis statement: With every electronic leap forward, the wick on our attention span shortens, blackens, takes longer to spark. In other words, smart about being stupid and stuffed with substantial laughs.

Too inane to fully work.

More hits then misses in this collection of skits. To my knowledge, the Loch Ness Monster is still on the loose.

The material is uneven; some of it is very funny while other skits fall flat.

Anthology comedy that is not without its charms

Audience Reviews for Amazon Women on the Moon

Sometimes very silly and not so funny, but with a interesting entertaining, just like the cast, Amazon Women on the Moon, have a kind of charm bring a few comic actings, just like the sketch of Arsenio Hall. Fresh.

As much as I like Joe Dante, I can only like a few of the jokes in his sketches; the work of the other guys is even worse. Landis' sketch with Arsenio seems to want to take black upward mobility down a notch with a couple old stereotypes. Ed Begley, Rosanna Arquette, Carrie Fisher and Andrew Dice Clay don't come off bad.

If you liked The Kentucky Fried Movie, you'll love Amazon Women on the Moon! This spoof movie is hilarious, outrageous, timely, and full of interesting film people to look for too. I love this movie, it's one of my favourite spoof films, and I highly recommend it.

A wacky late-night television film festival which has a hilarious main feature "Amazon Women on the Moon" and flips around to other channels and shows on the cable dial. Many of the jokes are hit or miss, but I was quite entertained. An SCTV fan like me really liked it.

Amazon Women on the Moon Quotes