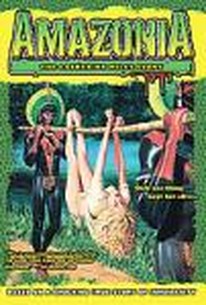 Set up as though it were a true tale, this far-out Italian potboiler by Mario Garriazo (aka: "Roy Garrett") begins with the reminiscences of a London housewife and continues as a long series of flashbacks. Catherine (Elvire Audray) lives with her parents on a plantation on the Amazon River. On her 18th birthday, the family takes a trip upstream and are attacked by Native Americans. Her parents are killed by poisonous darts and Catherine is captured and then raised by an Amazonian jungle tribe. After some adjustment to this new life she ascertains that her aunt and uncle were the real killers of her parents. This discovery sets her off on a mission of revenge across the Atlantic and into another series of adventures. ~ Eleanor Mannikka, Rovi

Will Gonzales
as Umu Kai

There are no critic reviews yet for Amazonia: The Catherine Miles Story (Schiave bianche: violenza in Amazzonia). Keep checking Rotten Tomatoes for updates!

Not a full-blown Cannibal movie, but it contains a lot of the standard elements that litter this trashy Italian sub-genre with some animal violence (monkey lovers beware), a bit of human gore, tribal rape, lots of naked flesh etc. The plot is very similar to Umberto Lenzi's 'Man From Deep River' but with a female lead this time as a blonde American teen who is kidnapped by a tribe of headhunters while on a family retreat in South America. This one has nothing really new to offer but still managed to entertain me as it's very silly and cheesy throughout... and of course I soaked up the bloodier moments with delight. Worth a look if you enjoy sleazy jungle romps.

Although not technically a cannibal movie (the main tribe are 'head-hunters'; cannibals feature very briefly but no cannibalism is shown), Amazonia shares enough similarities with the infamous gut-munching gore classics of the 70s and 80s to be considered part of the genre. Catherine Miles (Elvire Audray) is a beautiful 18-year old taken captive by a group of savages after her parents are killed on a river trip. Sold to a member of the tribe for the sum of 'a goose, a water-dog and a turtle', Catherine endures terrible suffering until she is helped by Umukai, a warrior who treats her with a bit of respect. After many months spurning Umukai, believing that he was the one who killed her mum and dad, she discovers that others were in fact responsible. Falling in love with her friendly native hunk, she convinces him to help her take revenge on those really responsible. Amazonia is pretty close in theme to The Man From Deep River, Umberto Lenzi's classic from 1972, but doesn't quite match that one in terms of quality. However, with a fair amount of cheesy gore (several be-headings, blow-darts in the face, some bloody bullet wounds) and loads of female nudity (courtesy of Audray and the native women, some of whom are pretty foxy), fans of this kind of thing should find just about enough to enjoy in this flick to make it worth a watch.

Silly but never outright dumb Amazonia (aka White Slave, aka Cannibal Holocaust II) is a fun little exploitation tale filled with lots of nudity and violence. It contains the prerequisite nature footage including animals getting killed and eaten but its nowhere as graphic as its cannibal cousin movies.