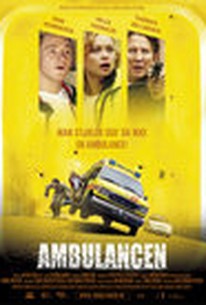 "The Ambulance" is an intense 80 minute tour de force about the two brothers, Tim and Frank, who make a robbery to get money to pay for their dying Mother, so she can continue her medical treatment in Germany, after the Danish health care system has abandoned her. But the robbery goes wrong and the police arrive and prevent the two brothers from using their planned getaway car. Instead they steal an ambulance, but they discover - during their escape from the police - that there's a dying heart Patient and a hospital intern, Julie, in the back of the ambulance. Julie tells the two brothers that the Patient will die, if they don't turn around immediatly and go back to the hospital! This splits up the two brothers. They are now, all of a sudden, in the dilemma of their life: Should they save the Patient - or their own Mother!...Tim is forced to turn against his own big brother to prevent getting a murder on his conscience!

There are no critic reviews yet for Ambulancen (Ambulance). Keep checking Rotten Tomatoes for updates!

There are no featured reviews for Ambulancen (Ambulance) at this time.