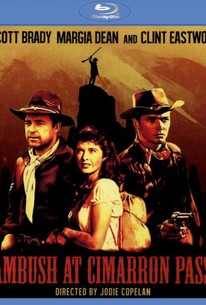 Despite the glut of TV westerns in 1958, 20th Century-Fox's Regal Films subsidiary continued grinding out profitable sagebrushers. In Ambush at Cimarron Pass, cavalry sergeant Scott Brady is ordered to escort a prisoner through treacherous Indian territory. A diehard Union sympathizer, Brady is forced to rely upon a group of ex-Confederates to successfully complete his mission. This may be difficult, however: the Apaches drive off the troop's horses, forcing them to complete the arduous journey on foot. Billed third in Ambush at Cimarron Pass is Clint Eastwood, no longer a bit player but not yet a star. ~ Hal Erickson, Rovi

Desmond Slattery
as Cobb
View All

A presumably tense story as the protagonists are without horses and harassed at all times by indians, but never manages to transmit that danger. [Full review in Spanish]

There are no featured audience reviews yet. Click the link below to see what others say about Ambush at Cimarron Pass!