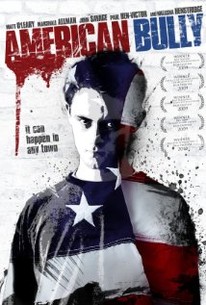 A morbid prank spirals into tragedy in this chilling drama concerning seven teenagers who fall under the reprehensible spell of violence. In the wake of viewing a gruesome internet video featuring a graphic beheading, something snaps inside of troubled teen Brandon (Matt O'Leary). Later, Matt's obsession with the video leads to a shocking transgression against a fellow classmate that will shock a nation already reeling from the 9/11 terrorist attacks. Natasha Henstridge and John Savage co-star. ~ Jason Buchanan, Rovi

There are no critic reviews yet for American Bully (Anytown). Keep checking Rotten Tomatoes for updates!

American Bully is one of those film that has a message to tell. What that message was is still a complete mystery to me. This entire film is based on a single act, which wouldn't be such a bad thing had they showed what led up to the act or what the results of the act were. The film is short to begin with, at just seventy-five minutes, but for the material presented, that was still too long. The entirety of this movie features a bunch of high school kids hanging out, getting drunk, and expressing racist views. After an hour of absolutely nothing going on, an opportunity presents itself, something finally happens, and the film is over. I thought with the subject material that this was a film that could have gone in a million different directions, but literally almost nothing happens! Matthew O'Leary stars, and while I consider him to be an underrated performer, it's roles like this one that are going to keep on the b-movie list. When actors are capable of so much more, why take a role like this? Clearly American Bully was a low budget, independent film, and without a payday or a strong leading role, there simply isn't a reason to take on a role of this nature. As I said the film has a message to tell and it seems pretty cut and dry until the end. The big left turn may have made the ending a bit more interesting, but calls into question the entire message the film had originally intended to portray. Overall I found the whole thing to be just a strange experience severely lacking in almost every category.