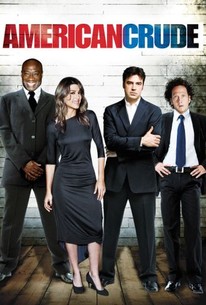 Actor Craig Sheffer makes his feature directorial debut with this ensemble comedy featuring Ron Livingston, Rob Schneider, Jennifer Esposito, and Michael Clarke Duncan, and following a harried group of characters through twenty-four hours in a typical Los Angeles day. Quite a bit can happen over the course of a single day in L.A., and when smooth-talking scam artist Johnny (Livingston) decides to throw a bachelor party for his best friend Bill (Schneider) the events of the day take a decidedly bizarre turn. As the festivities get underway, the appearance of a transvestite prostitute, a trigger-happy ex-con, and a notorious porn king signal that this isn't going to be your typical night on the town.

There are no critic reviews yet for American Crude. Keep checking Rotten Tomatoes for updates!