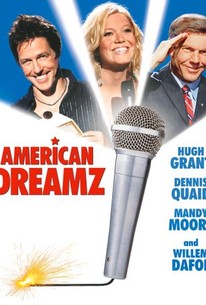 On the morning of his re-election, the President decides to read the newspaper for the first time in four years. This starts him down a slippery slope. He begins reading obsessively, reexamining his black and white view of the world, holing up in his bedroom in his pajamas. Frightened by the President's apparent nervous breakdown, his Chief of Staff pushes him back into the spotlight, booking him as a guest judge on the television ratings juggernaut (and the President's personal fave), the weekly talent show American Dreamz. America can't seem to get enough of American Dreamz, hosted by self-aggrandizing, self-loathing Martin Tweed, ever on the lookout for the next insta-celebrity. His latest crop of hopefuls includes Sally, a conniving steel magnolia with a devoted, dopey veteran boyfriend, and Omer, a recent Southern Californian immigrant (who just happens to be a bumbling, show tune singing, would-be terrorist awaiting activation). When both Sally and Omer make it to the final round of Dreamz -- where the President will be judging along with Tweed -- the stage is set for a show the nation will never forget.

Willem Dafoe
as Chief of Staff

Carmen Electra
as Herself

Still, it is gratifying to come across a mainstream film that seems happy to risk offending so many different groups. And, best of all, Weitz bravely declines to chicken out and give us a cosy ending.

Don't be offended, none of this really means anything, it's just a goof about a lot of dumb stuff going down around us.

The film takes on more than it knows how to handle, and what starts out as a standard poke-in-the-eye of TV switches its satiric focus to the incompetence of terrorists and politicians, the heartlessness of celebs, and even the mess of Iraq.

Begins really quite well, but ends with three zeds, not one.

The director of American Pie has set out to make a merciless satire of American media culture along the lines of Network, but his ideas are so commonplace that nothing registers except the bile.

Promising more bite than it delivers, Dreamz is pitched too broadly to get very deeply under your skin. Still, there are some smarts at work here, and it will make you laugh.

An all-over-the-map satire of American Idol where there are enough positives to outweigh the negatives.

They wanted to cover too many things, and in some cases they have stayed halfway. [Full Review in Spanish]

Too broad and obvious to rate as satire, the film is finally neither focused nor acidic enough to say anything meaningful about the sorry state of the US.

Truth is, American Dreamz could have used a bracing dose of Simon Cowell's cruel, sharp-tongued venom.

Both delights and contrivances combine to provide a bombshell final reel that is at least a dozen shades darker than anyone would expect.

Based on the material reality gave the writers of this film to work with, it should've been f---ing hilarious, right? Not so much.

I last watched this years ago. I could remember being disappointed in it, but not why. Had a chance to re watch it recently. I do like Mandy Moore and the whole "American idol" take off angle seemed like it could be fun. 30 minutes in, and I remember what I didn't like. All the political stuff and the terrorist bit... Just two story lines that don't go together, and it's just not funny enough. I did keep watching. I guess there's something to it, but I could have been so much better than it was if they played up more on how the TV stations use the contestants and less on the other crappy stuff. There is enough serious movies about politics and terrorism without throwing it into this type of movie.

Average comedy that is much better than what I'd think this would be, American Dreamz had good moments of laughter. The cast assembled here are pretty good in their parts. The film pokes fun of American Idol and it does it very well. This isn't the best comedy around, but works well enough to keep you entertained. The film is fairly underrated and it does manage at being one of those films that is much better than what the critics said. I found this film to be very amusing and I'm not one who normally likes these types of films. I enjoyed the film and thought it had plenty of good laughs throughout the film. The script was imperfect, but worked well enough to be entertaining. I thought that Mandy Moore was great here and really was the best part about the film. If you're looking for a good comedy with some good laughs, then this film is for you. The cast make the film interesting and director Paul Weitz keeps the ball rolling in delivering the laughs. American Dreamz is not a perfect comedy, but for what it is, it's a mindless comedy that is underrated. The film is purely a mindless, enjoyable comedy. If you're in the mood for something fun, then give this one a shot, just don't expect anything great with the film. The film nonetheless succeeds at being funny despite its imperfections. The cast make it work well and the gags are funny. This a very good underrated comedy that is worth seeing.

This movie sucked, I hated every moment of it. It was unfunny, bad story, characters are idiots, and the ending was retarded.

Laugh-out-loud satire about our land of excess. Omer, the terrorist, is the most reasonable character in the entire movie: "I just feel confused...about this country. There are so many nice people here, but it does so much harm in the world... So to what degree is this country culpable for its actions? Are Americans to blame for America?"