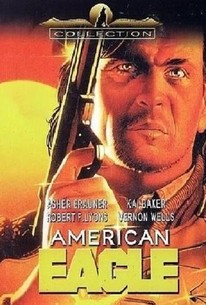 American Eagle deals with three Vietnam survivors, particularly one who carries a grudge against his war buddies after they stop him from a wanton killing of a Vietnamese civilian. The film delves into the post-Vietnam decades that finds two of the vets unable to leave the violent wartime behind them as they join mercenary efforts around the globe. Eventually one tries to change his ways but runs into a (U.S.) government that won't let him stop the killing.

Debra Kaye
as Waitress
View All

There are no critic reviews yet for American Eagle. Keep checking Rotten Tomatoes for updates!

There are no featured reviews for American Eagle at this time.