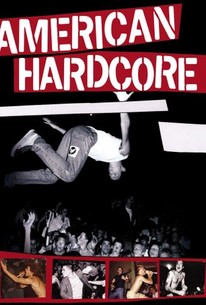 Critics Consensus: American Hardcore is an informative and highly entertaining look at the heyday of punk in the early 1980s.

Critics Consensus: American Hardcore is an informative and highly entertaining look at the heyday of punk in the early 1980s.

Critic Consensus: American Hardcore is an informative and highly entertaining look at the heyday of punk in the early 1980s.

Generally unheralded at the time, the early-80s Hardcore Punk Rock scene gave birth to much of the rock music and culture that followed. There would be no Nirvana, Beastie Boys or Red Hot Chili Peppers were it not for hardcore pioneers such as Black Flag, Bad Brains and Minor Threat. Hardcore was more than music -- it was a social movement created by Reagan-era misfit kids. The participants constituted a tribe unto themselves -- some finding a voice, others an escape in the hard-edged music; some sought a better world, others were just angry and wanted to raise hell.

... an enjoyable if incomplete nostalgia trip.

American Hardcore, Paul Rachman's impressively thorough documentary, tells of the second-generation punk rockers who learned from the Sex Pistols and Ramones and then did their DIY thing.

American Hardcore gets what most music lovers could not at the time: Sometimes, that noise in your head and that anger in your heart just has to get out, and there's always a guitar around somewhere.

Instead of an insightful look at disaffected youths finding an outlet for angry energy in rock rages, American Hardcore is a slanted history lesson coming solely from its subjects.

What's irritating about the movie is how much time it spends on empty nostalgia -- shouldn't real punks scorn reminiscing? -- and how little time it spends truly exploring the roots of America's punk prime in the early 1980s.

For a documentary ostensibly about the history of the hardcore punk music movement that reigned in America during the '80s, director Paul Rachman and writer Steven Blush indefensibly omit the genre's most talented and high-profile band (The Dead Kennedys)

Struggles under the weight of its own ambition.

The hit-and-run effect sometimes suggests a documentary equivalent to slam dancing, but without the bruises.

Rachman's chronicle suffers not from a shortage of authentic footage of ready-made hardcore shows, complete with (completely necessary) subtitled lyrics, or doughy, balding, talking heads still bragging about the thrown punches and peed-on chicks of yeste

A film for the fans, especially if you were one of those sonic youths venting steam at a guerrilla show in someone's basement, a VFW hall or club that condescended to present a hardcore show. For once-upon-a-time kids now irrevocably middle-aged, the kick

This was good in that it was bolstered by testimonials from the hardcore scene's biggest names, generally, but its scope was simply too broad. There is a lot of new information served up in a short period of time, for the uninitiated, and without the proper context and analysis a lot of it is rendered ineffectual. It provides a distillation of the movement that one could approximate without the two-hour investment and only sweetens the pot by throwing in a few band names and old clips. The most interesting part might be just seeing these punk rockers all middle-aged, sitting in front of children's jungle gyms.

How can a documentary about the rise of the fiercely energetic, riotously entertaining and badass hardcore offshoot of punk be so boring? The film is grossly unfocused, travels all over the place and never seems to find the right chord. Interviews with some of hardcore punk's most influential artists (including the inimitable Henry Rollins) have no logical thread, they are simply wrapped around some often great concert footage. The all-over-the-place schizofrenic nature of the film is not even an attempt to imitate what the hardcore punk movement consisted of because it absolutely lacks the manic, heedless energy that fueled it. A great disappointment. Worth seeing (for punk fans) for the concert sequences, Henry Rollins and not much else.