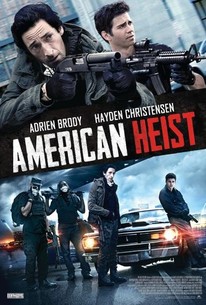 James owes his life to his older brother, Frankie after taking the rap for a crime they committed together. While Frankie served time, James worked to turn his life around, got a steady job and began courting his former girlfriend Emily. Now, Frankie is released and back on the streets with no money and no place to go. He turns to his underworld connections and convinces James to join him in hopes that one last job will be the solution to change both their lives.

Lance E. Nichols
as The Boss

American Heist, I want my 94 minutes back.

Despite a few strong emotional beats, the crime drama "American Heist" proves as undistinguished as its generic title.

American Heist has straight-to-video written all over it. Once there, I recommend you skip directly to the last act if you decide to watch it at all.

The film offers a veritable smorgasbord of dated, only-in-the-movies clichés about the debt-ridden working class.

Slick but derivative and forgettable on all levels.

The movie suffers from underdeveloped characters, a lack of originality and an unnecessary social commentary. Half good, half bad.

Hayden Christensen and Adrien Brody turn in solid performances, but this by-the-numbers exercise does little to distinguish itself from any number of better crime thrillers.

Christensen makes a decent Everyman hero and even shows some warmth in his scenes with Jordana Brewster, but their subplot doesn't amount to anything at all. Neither does the movie.

The heist itself is not very exciting, which is rather a let-down considering the grand-sounding title.

It isn't fair and it isn't right, but in the minds of many moviegoers, certain performers will always be associated with their most memorable roles. For me, Hayden Christensen will always be Anakin Skywalker, and it's strange to see him in anything but a Science Fiction film, but that doesn't mean he's not capable of playing anything else, as he shows in American Heist. Christensen plays James Kelly, an man who became an ex-con, for simply looking up to and trying to help his older brother, Frankie (Adrien Brody). As James is getting his life on track, Frankie is being released from prison and is of course looking for one big score. Now, James has to decide what's more important, keeping his new life on track or saving his older brother. Hayden Christensen gives an admirable performance, once you get passed the initial shock of Anakin cursing and covered in tattoos, but it's Adrien Brody who steals the show. Brody isn't an Academy Award winner for nothing, as his character pulls at the heart strings and has you running the gambit of emotions. Everyone knows someone like Frankie and wonders which way they'll turn out. In this case, there is also the added incentive of finding out if he'll drag his brother along with him, either way. American Heist isn't the best film out there, the story has been done, and at times, it's a little dull. This film is more about the characters and their values more than anything else. There's a fair share of language and guns, but unlike many other thrillers, that's not really the focus here, which in the end, is appreciated.