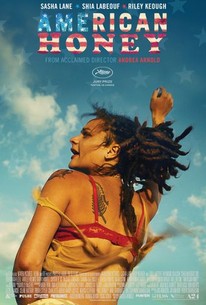 Critics Consensus: American Honey offers a refreshingly unconventional take on the coming-of-age drama whose narrative risks add up to a rewarding experience even if they don't all pay off.

Critics Consensus: American Honey offers a refreshingly unconventional take on the coming-of-age drama whose narrative risks add up to a rewarding experience even if they don't all pay off.

Critic Consensus: American Honey offers a refreshingly unconventional take on the coming-of-age drama whose narrative risks add up to a rewarding experience even if they don't all pay off.

Star, an adolescent girl from a troubled home, runs away with a traveling sales crew who drive across the American Midwest selling subscriptions door to door. Finding her feet in this gang of teenagers, one of whom is Jake, she soon gets into the group's lifestyle of hard-partying nights, law-bending days, and young love.

Crystal B. Ice
as Katness

Will Patton
as Backseat Cowboy

Andrea Fantauzzi
as Jogger
View All

A completely gorgeous and remarkable film... American Honey manages to depict the desperation of being a poor young person in a forgotten corner of America without condescending to or worshipping its destitute characters.

American Honey is undeniably gorgeous. It's drenched in color; it drips with it like, yes, honey. In the center of it all is Sasha Lane as Star, just as bright (if not brighter), and impossible not to watch.

It's the strategic vaporousness of the entire enterprise-its canny refusal to be "about" anything except an immersion its own roiling, over-conscientiously detailed millennial milieu-that rankles.

For all its flaws, it's a strangely absorbing film.

The film is much too long with occasional false notes -- overwrought scenes which strain credibility... But Lane, who's never acted before, gives an astonishingly complex and persuasive performance.

It's all the fixins. Pistol-whipped to perfection. My teeth positively ache for another helping of American Honey; I wanna eat until I pass right out.

Arnold's acumen with the subversiveness that lurks just beneath the surface is playfully reserved, bubbling up only when absolutely necessary.

Lane and Arnold have made Sasha a completely different person. In two-hours-and-40-minutes, they have formed a whole life.

It isn't much different than Arnold's previous film Fish Tank- on the verge of womanhood, a girl from a poor family journeying through self-discovery. The hope Arnold portrays in those two films has less to do with its setting but with youth.

The handheld camerawork and the lingering on minuscule details (like arms, legs, tattoos, and even mud puddles) only weaken the sequences of emotional, human interactions.

Almost three hours of film is too much for me to endure a director who doesn't seem to know how to use a camera (I guess she must find focus an overrated feature) and a self-indulgent, directionless narrative that is full of annoying characters and doesn't go anywhere.

I don't like quoting other reviewers in my own review, but I think Eric Kohn of Indiewire sums it up perfectly by saying "American Honey" invokes the explosive sense of liberty that comes with living dangerously." I couldn't have said it better myself. There is nothing like watching a film which involves scenarios that I've never had to deal with. In that way, there's a keen sense of truth and honesty to the story. None of the actors feel like they're acting, which is one of the greatest compliments an actor can be given. Everyone has chemistry and everyone looks like they're enjoying what they're doing. So even though I can't outright say I relate to any of the characters, I can appreciate watching people do what they have to do to survive. At almost 165 minutes, American Honey is a long watch, and can be difficult when the plot seems to lead nowhere, but I'll always consider a new experience a worthy experience. And certainly spending time with a dozen magazine salesmen and women who travel the country and scam people to stay alive is a new experience. Long but inevitably inspiring, American Honey is one of the more unique films you'll see. 7.3/10

Quite a unique and remarkable film, that has superb acting. They did the messy takes in this movie which was quite refreshing, it is all not clean cut frames and images. Was not a fan of the heavy drug usage, but understand the traveling door to door salesman.

It can be pretty intimidating when a feature film is released with a run time that nears the three hour mark. Back in the day, films like Ben-Hur or Gone With the Wind were much more constant and that length was expected for some films. American Honey may not have needed to be quite this long, and I am here to express my feelings on why that is. This is a solid film overall, but could have been fantastic if it kept its run time around the two hour mark. When a film like King Kong (which is arguable) uses its time wisely, setting up characters and slowly building to a big reveal, that is a three hour run time used right. American Honey utilizes the tactic, while not quite having much of an impact in its final act. Here are my thoughts on this overlong, yet uniquely made film. I am not saying this only because Shia LaBeouf is one of the leads here, but when I watched this trailer, I was hoping for a vibe like A Guide to Recognizing Your Saints. That is a very polarizing film that I happened to find extremely powerful. Sadly, there are many elements explored this film that are not paid off, which is frustrating when that is not able to happen in a near three hour film. Following Star as she transforms as a character, she abandons her boyfriend and kids, joins a group of homeless drug addicts and drunks who sell magazine subscriptions for life, and develops relationships with the wrong people, making the wrong life choices along the way. Her transformation is what makes this film not seem quite as long as it is, but there is not enough closure for her character by the time the credits roll. Shia LaBeouf has not been see for a while, due to his actions in real life, but that doesn't seem to be stopping him from making a slow comeback. There is no way he took this job just for a paycheque, because he immerses himself in this role, becoming this character from start to finish. Having said that, actress Sasha Lane is what truly makes the remarkable scenes throughout this film as great as they are. Her portrayal of Star and her interaction with each and every character feels so well-realized. In the end, her character is what kept me sucked into this story from beginning to end. It is a hard movie to sit through at times and it's definitely for a very mature audience, but I do recommend it for her performance alone. While I am sure writer/director Andrea Arnold had a very good reason for having the old 4:3 Pan and Scan aspect ratio throughout the entire duration of the film, it will make average moviegoers wonder if they have an improper version of the film. To my knowledge, the last film to do this was Best Picture Oscar-Winner The Artist back in 2012. That film had a very clear vision and reason why that aspect ratio had been utilized. Aside from having a classic film feel, I went through this entire film, not really understanding why this was used. I am sure if I took the time to research it there will be a reason, but I feel as though things should be a little more apparent when watching a film. That being said, I found it very unique nonetheless and I can do nothing but applaud her guts for that choice. In the end, I enjoyed this film quite a bit, but I am struggling to recommend this film to anyone if I am being completely honest. Hardcore film lovers may get a kick out of certain styles used like I did or become immersed in this character's transformation, but I can see average moviegoers falling asleep to a film like this, especially for its lengthy run time. Overall, this is a very well-directed film and I hope Andrea Arnold continues to make quality like this in the future, but American Honey is for a very specific audience. I can only see 1 in 10 people really enjoying this film as far as the average moviegoer goes, but if you like quality films no matter what their content is, I am sure you will find things to like here. American Honey does not need to be three hours long, but it is a solid film nevertheless.