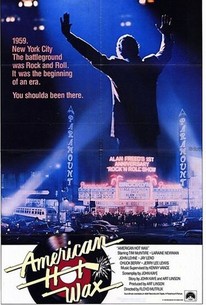 This lively musical comedy pays tribute to the birth of rock & roll in the late 1950s and the instrumental role played by disc jockey Alan Freed who helped bring the new sound into vogue. Much of the story centers on the daring deejay's attempts to put on the very first live rock & roll stage show at the Paramount Theatre in Brooklyn. To do this he must overcome the protests of concerned and angry parents, conservatives, and local police. Several performers of the era appear in the film including Chuck Berry, and Jerry Lee Lewis.

Al Chalk
as The Chesterfield

Sam Harkness
as The Chesterfield

Arnold McCuller
as The Chesterfield

Chuck Berry
as Himself

Jerry Lee Lewis
as Himself

Screamin' Jay Hawkins
as Himself

Carl Earl Weaver
as Member of The Chesterfields

Charles Irwin
as Timmy and the Tangerine

Jo Ann Harris
as Timmy and the Tangerine

Lonna Montrose
as Girl at Bar

Fil Formicola
as Man Singing in the Hallway

If you can believe what you see in "American Hot Wax," the only person in the New York record business taking bribes in 1959 was the janitor at Freed's radio station.

American Hot Wax moves at a fast pace not unlike the music that is almost constantly playing in the background.

Perhaps a reel is missing.

... a solid stellar performance by Tim McIntire, and if he doesn't manage to save the film, he gives it a much-needed center of gravity.

There are no featured audience reviews yet. Click the link below to see what others say about American Hot Wax!