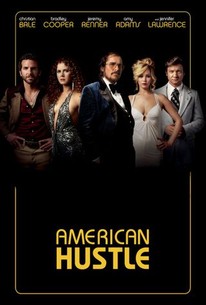 Critics Consensus: Riotously funny and impeccably cast, American Hustle compensates for its flaws with unbridled energy and some of David O. Russell's most irrepressibly vibrant direction.

Critics Consensus: Riotously funny and impeccably cast, American Hustle compensates for its flaws with unbridled energy and some of David O. Russell's most irrepressibly vibrant direction.

Critic Consensus: Riotously funny and impeccably cast, American Hustle compensates for its flaws with unbridled energy and some of David O. Russell's most irrepressibly vibrant direction.

A fictional film set in the alluring world of one of the most stunning scandals to rock our nation, American Hustle tells the story of brilliant con man Irving Rosenfeld (Christian Bale), who along with his equally cunning and seductive British partner Sydney Prosser (Amy Adams) is forced to work for a wild FBI agent Richie DiMaso (Bradley Cooper). DiMaso pushes them into a world of Jersey powerbrokers and mafia that's as dangerous as it is enchanting. Jeremy Renner is Carmine Polito, the passionate, volatile, New Jersey political operator caught between the con-artists and Feds. Irving's unpredictable wife Rosalyn (Jennifer Lawrence) could be the one to pull the thread that brings the entire world crashing down. Like David O. Russell's previous films, American Hustle defies genre, hinging on raw emotion, and life and death stakes. (c) Sony

Stacy Hock
as Girl Outside Stall

It's enjoyable and fun to watch, but just barely touches the surface of its own narrative.

It's a sly film that slips through your fingers, leaving the glitter of great performances, but one you'll be hustling to watch again.

A movie as smart as 'American Hustle' knows that those tactile pleasures only matter if they're attached to some kind of emotional resonance.

Few are the films that can be described as profoundly artistic and deliriously entertaining, substantial and soufflé-like. Noble, and screwy.

The movie's greatest strength [is] Russell's magnanimity toward his characters, an equable, never cloying embrace of their imperfections.

Depending on who you speak to, this film is either ruthlessly entertaining, or heinously stupid, and given David O'Russell's reputation, I'm personally inclined to say the latter.

An embarrassment of riches.

It's just kind of incoherent, sloppy - skittish and kind of lacking the propulsive spirit the zooming camera's begging for. Scorsese wrung out, hung to dry.

An entertainingly audacious movie that will doubtless be compared to The Wolf of Wall Street because of the similarity in tone and themes, but this time around David O. Russell has almost out-Scorsese'd Scorsese.

American Hustle is a film made from the same cloth as great movies of the past.

There are some genuinely funny and well written parts and all the actors are delivering the goods, yet I couldn't help but feel this could have been shorter, more on point. It requires quite some concentration during some parts to follow the details of the caper and the entire who is fooling who. Overall enjoyable, especially the use of music, but slightly overrated compared to Russell's other works.

A deliciously stylish and hilarious con movie with a clever script and a fabulous gallery of intriguing characters, even if always one step back from crossing the line between delightfully over-the-top and madly caricatural, including a miscast Jennifer Lawrence occasionally overacting.

Long winded and overrated! Lawrence however is a force to be reckoned with, stealing each scene she was in! Adams english accent with no bra throughout also worked for me!

All the makings of a modern classic, American Hustle may feel over-long and drawn out, but the performances of the four main actors are too good to pass up. Amy Adams and Jennifer Lawrence are brilliant--as usual--and Christian Bale and Bradley Cooper give extraordinarily strong performances. It's funny, well-staged, well-scripted, expertly directed, and accompanied by an iconic soundtrack.