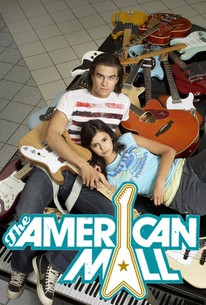 The executive producers of High School Musical keep the good times rolling with this upbeat musical comedy set in the one place every American teenager's home away from home - the local shopping mall. Ally (Nina Dobrev) is an optimistic adolescent singer/songwriter whose hard working mother owns the mall music shop frequented by every teen in town. When Ally shares her music with Joey (Rob Mayes), a janitor in the mall who harbors rock star ambitions, she is thrilled to find someone who can truly relate to her songs as well as her heart. Trouble looms on the horizon, however, in the form of the mall owner's spoiled rotten daughter Madison (Autumn Reeser). Madison is the kind of girl who's used to getting whatever she wants, and what she wants now could prove disastrous for both Ally's ambitions, and her mother's popular music store.

Rodney To
as Ben
View All

Critic Reviews for The American Mall

The young cast is full of charmers with great big voices... These performances win us over when the screenplay cannot.

Audience Reviews for The American Mall

There are no featured audience reviews yet. Click the link below to see what others say about The American Mall!