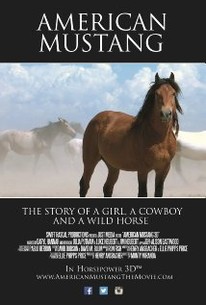 In an artful blend of exquisite nature documentary and character-driven narrative, the majestic wild horses of the American West are revealed in stereoscopic 3D as never before. The wonder in a girl's eye pulls us into the drama that unfolds on hundreds of millions of acres of public land. The battle lines have long been carved into the landscape, and the players are deeply entrenched. Yet as the subtle choreography that has evolved over thousands of years begins, we are captivated. The intricate dance between a man and a wild horse presents lessons for us all, even the battle-hardened special interest groups fighting for the place of the AMERICAN MUSTANG.

There are no critic reviews yet for American Mustang. Keep checking Rotten Tomatoes for updates!

There are no featured reviews for American Mustang at this time.