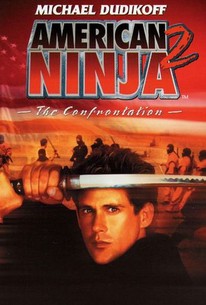 American Ninja 2: The Confrontation spotlights Michael Dudikoff and Steve James as a pair of combustible U.S. Army Rangers. Dudikoff and James are ordered to find out why so many Marine guards have been disappearing from their posts at the US Embassy in a mythical Carribean country. Turns out that villain Gary Conway has been kidnapping the Marines and forcing an abducted engineer to reprogram the captive Leathernecks so that they'll join Conway's army of zombielike assassins. Naturally, the scientist has a beautiful daughter (Michelle Botes) whom Conway uses as leverage. Battling not only Conway's minions but the corrupt local authorities, martial arts experts Dudikoff and James effectively lay waste to the villain's previously impenetrable stronghold.

A slight improvement over its lackluster predecessor...

The first film lacked any true ninja skills by Dudikoff, but the second time around it is a different story. The action scenes are better, which is a compliment, considering the budget was slashed by Cannon. The story is very uneventful and like most Cannon films, this is lacking in the quality department. The plot is laughable, and the whole ninja involvement is for show only. I found this to be a better film compared to the first. The first film has a better storyline, but this film is more focused on the action scenes. Not a great film by any means and whilst it is marginally better, it is far from the great action scenes of its era. 03/02/2019

This sequel martial arts film with the return of Michael Dudikoff and Steve James is more enjoyable action than the original one.