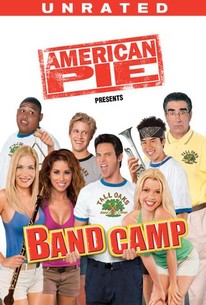 The "Stiffmeister" legacy lives on in this installment of the wildly popular teen comedy series that finds Steve Stifler's younger brother Matt (Tad Hilgenbrinck) sentenced to a summer at band camp after a wild school prank goes awry. It seems that mischief runs in the family, and when Matt is told that he has to spend the entire summer surrounded by trombones and clarinets, he plans a serious of outrageous pranks in a bid to make the best of his nerdy new surroundings. As the summer and the hormones heat up, Stifler sets up a series of hidden cameras in hopes of catching some revealing images of the nubile "bandies." When Stifler reconnects with his long-lost childhood sweetheart, Elyse (Arielle Kebbel), while serving out his sentence, the blossoming romance between the pair forces the perpetual prankster to consider the prospect of curbing his bad-boy ways. Original American Pie star Eugene Levy returns to offer some helpful advice for the band-camp bound Stifler sibling. ~ Jason Buchanan, Rovi

Rachel Veltri
as Dani
View All

Who Wants ANOTHER Slice of "American Pie"?
David Duchovny Set to "Hulk" Up?
Oh It’s Already Been Broughten (Part 3)

Crass and unnecessary sequel with lots of cursing, sex.

Does anyone really want to see a moronic, cheapie sequel/spin-off to a flailing series? I haven't met one person yet who can answer yes to this question.

...a shoddy and blatant cash grab.

Funny, high-spirited and a pleasurable place to toot your horn at.. Hilgenbrinck's brilliant

It's still a fascination how Band Camp went straight to DVD. The movie is a poor transition into a subplot from a successful series. The humor is just as incoherent as the plot and even Eugene Levy's charm could do no better to provide for this pointless story. 0.5/5

Not going to be as funny as the original cast but it still had me in stiches. A must see!

Ok but not as good as the previous versions.

This is not one real good laugh and it focuses too much on one character - Matt Stiffler, the younger brother of Steve Stifter who we all know from the previous three American Pie movies. Tad Hilgenbrink really isn't bad as the new Stifmeister and he impersonates his older brother pretty well and convincing but he however isn't given exactly wonderful material to work with. This straight to video teenage comedy lacks some real good memorable moments and well executed jokes. The story is too simple and it lacks some real depth and credibility.