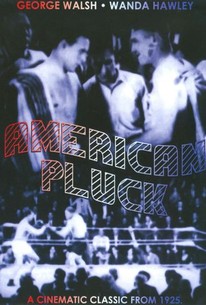 Based on Blaze Derringer, a 1910 novel by Eugene P. Lyle, Jr., this low-budget silent melodrama starred George Walsh in the aftermath of Metro's Ben Hur, in which he had been summarily replaced by newcomer Ramon Novarro. Toiling now for poverty row company Chadwick, Walsh played Blaze Derringer, the wastrel son of a cattle king sent out into the world with the strict order not to return until he has earned $5,000. Derringer hooks up with a couple of hobos, becomes a prize fighter, and falls for the exiled Princess Alicia of Bargonia (Wanda Hawley). Returning with the princess to her Balkan homeland, Blaze helps overthrow a usurper (Frank Leigh), winning both a wife, the princess, and a throne in the process.

There are no critic reviews yet for American Pluck. Keep checking Rotten Tomatoes for updates!

There are no featured reviews for American Pluck at this time.