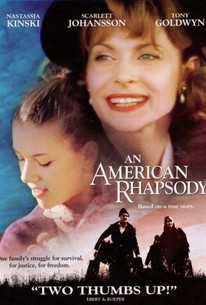 Critics Consensus: Though obviously a labor of love, American Rhapsody is an uneven, heavy-handed effort, particularly in the second half.

Critics Consensus: Though obviously a labor of love, American Rhapsody is an uneven, heavy-handed effort, particularly in the second half.

Critic Consensus: Though obviously a labor of love, American Rhapsody is an uneven, heavy-handed effort, particularly in the second half.

A true story based on the life story of writer/director Eva Gardos, this film depicts the personal odyssey of a family's escape from Communist Hungary. One night, Margaret (Nastassja Kinski) and Peter (Tony Goldwyn) arrange to escape Hungary with their eldest daughter in tow, forcing them to leave behind their youngest, Suzanne, in the care of Margaret's mother. When the mother is separated from the young child, she goes to live in a peaceful Eastern European countryside with a loving man and woman who raise her until age six, where Suzanne is sent for by her birth parents, now living in America. She finds the adjustment difficult and does not fully comprehend that Margaret and Peter are her parents, but she is willing to stay, and if she feels the same way in several years, Peter has agreed to give her a ticket back to Hungary. Later, as a rebellious teenager (played by Scarlett Johansson), with Margaret becoming a highly overprotective mother, she takes her father up on his offer to go back and reconnect with those who raised her as a child. While in Hungary, she has a change of heart , however, and discovers her true identity. The feature also co-stars Mae Whitman, Emmy Rossum, and Larisa Oleynik.

Larisa Oleynik
as Maria at 18

Klaudia Szabo
as Maria at Age 4

Bori Kereszturi
as Suzanne at Age 3

Tatyana Kanavka
as Girl in Airport

Lorna Scott
as Neighbor with Poodle

Marlee Jackson
as Sheila at 7

Kati Bacs
as Woman No. 1 at Market

Zsuzsa Szager
as Woman No. 2 at Market
View All

Critic Reviews for An American Rhapsody

An American Rhapsody, in its straightforward way, earns its emotions.

An American Rhapsody speaks from the heart to the heart.

This should be a fascinating story, but An American Rhapsody never develops a melody or a rhythm, much less the epiphany the title suggests.

The film is never less than engaging.

Has an unerring eye for the banal intricacies of 1950s pre-planned suburban neighborhoods.

A story this compelling deserves a better telling.

A heartfelt coming of age tale of an Hungarian-American adolescent, well acted by Scarlett Johansson

In spite of the movie's inflated title, writer/director Eva Gardos tells an emotionally charged story of Hungarian immigration that is touching and historically accurate.

Not too many movies touch me so much that I need to retreat to somewhere private and sob my eyes out - this was one of them. Enormously poignant...

The States becomes an apple-pie wonderland of Elvis and Coca-Cola, the old country either a gray police state or, in scenes of Suzanne's happy childhood, a pastoral haven.

The 'stranger in a strange land' story has been told many times, in print and on film, but seldom as poignantly.

Audience Reviews for An American Rhapsody

Based on a true story, An American Rhapsody is an inspiring tale of heroism and self-sacrifice. When a Hungarian family flees to America to escape from the oppressive Communist regime the youngest daughter is separated and left behind, but years later when she is reunited with her family she feels caught between two worlds. Unfortunately, the film is poorly structured and isn't able to build any suspense or momentum. Additionally, the characters aren't developed very well, and never really connect with the audience. So while the story is quite interesting, An American Rhapsody suffers from weak filmmaking.

Not a blockbuster, but an interesting true story family drama. The casting director of this movie sure knew talent when they saw it. All throughout the film we are blessed with many up and comings..especially Scarlett Johansson. The movie itself is made-for-tv quality, and slightly better than average.