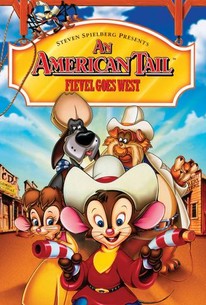 In this animated sequel to An American Tale, Fievel Mousekewitz strikes out from not-so-enthralling New York City in a wagon train headed West. Helping propel the departure is a crafty cat named Cat R. Waul (John Cleese) who tells our Fievel that out West the cats and mice get along just fine. Once on the trail, Fievel finds that the cat's real plan is mice meat pie out of the little rodents, and Fievel tries his darndest to warn everyone, but to no avail. On his side, however, are a couple of friendly cats, including one named Tiger (Dom Deluise).

Erica Yohn
as Mama
View All

There is nothing really the matter with An American Tail: Fievel Goes West, except that it is not inspired with an extra spark of imagination in addition to its competent entertainment qualities.

Primarily aimed at children, it is a cartoon romp with the honky-tonk humor of a Looney Tunes adventure. But it is witty, well crafted-and clever enough to amuse adults.

In the end, it's a pretty entertaining story with twists and turns.

Holds up as a strong and exciting animated film.

The further adventures of immigrant mice.

What can you say about a sequel that comes five years later and yet feels rushed?

Our sweet little Fievel has been stricken with a case of sequelitis ... but it's not too bad.

I haven't seen this isince 1991, and I don't really remember anything about it, but I don't recall it being bored by it, so I guess it's a pretty okay film.

I ADORED this movie as a child. Not sure why, I think I loved the animation. Now I marvel that Jimmy Stewart and John Cleese were voices in here! Things you learn in your later years!

Whereas the first American Tale likened Fievel and his family to American Immigrants, this one takes us on a visit to the American Wild West, for some great animal gun-slinging action. Wonderful animation by Don Bluth (Dragon's Lair creator). I don't remember any of the songs within. It's a fun and colorful adventure.