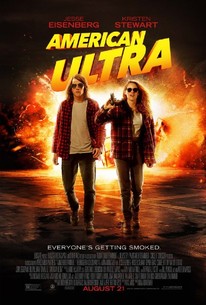 Critics Consensus: American Ultra has some interesting ideas, but like its stoned protagonist, it's too easily distracted to live up to its true potential.

Critics Consensus: American Ultra has some interesting ideas, but like its stoned protagonist, it's too easily distracted to live up to its true potential.

Critic Consensus: American Ultra has some interesting ideas, but like its stoned protagonist, it's too easily distracted to live up to its true potential.

American Ultra is a fast-paced action comedy about Mike (Eisenberg), a seemingly hapless and unmotivated stoner whose small-town life with his live-in girlfriend, Phoebe (Stewart), is suddenly turned upside down. Unbeknownst to him, Mike is actually a highly trained, lethal sleeper agent. In the blink of an eye, as his secret past comes back to haunt him, Mike is thrust into the middle of a deadly government operation and is forced to summon his inner action-hero in order to survive. (C) Lionsgate

American Ultra, built upon ridiculous premise and casting, is not only the funniest but unexpectedly one of the best action movies of the summer.

A loud, ugly, slapdash combination of action movie, pot comedy, criminal romance, and conspiracy thriller - and about as lumpy and ungainly as you'd imagine such a stew would be.

There are patches where the film stalls and crumbles under too much explanation. That's a shame, because the movie does have bite and sterling moments. But you shouldn't have to be stoned to appreciate them.

It's a very August sort of movie, the kind that benefits from low, lax expectations.

Nourizadeh seems too seduced by the action set pieces to keep his eyes on the characters.

This is a grating, sometimes very violent comedy-thriller that suffers from a chronic identity crisis. The film can't work out whether it's a slacker romance or an all-action spy movie in the Manchurian Candidate mode.

That the filmmakers have some consciousness of the criminal role of the CIA makes the movie, that is neither funny nor well made, a shameful project from the start.

The violence often feels gratuitous - we're told Mike singlehandedly kills seventeen people - but the look of stoned amazement that drifts over Eisenberg's face each time he pulls off some feat of derring-do is worth the wanton bloodshed.

Aside from a few bright spots, American Ultra watches like a collection of scenes strung together because it seemed like it'd be cool.

In the end, all I wanted was for it to be over as soon as possible. [Full Review in Spanish]

"American Ultra" is an interesting idea not executed very well. It needs to be taken much more seriously than its casting and execution provides.

Well now, here's a cool idea for an adventure: have the town slacker turn out to be a fugging terminator ("Am I a robot," our hapless hero inquires), the brightest, most highly trained superior in a 1000 mile radius. Somehow though this one gets lost and the cool idea is diluted with curious and untimely introspections on the purpose of trees (and no, not THOSE trees, but real trees). The result is a supporting cast that's more interesting than the leads, however brief their appearance. There's the action set pieces to make up for the shortcomings, but even those leave something to be desired.

Love or hate Jesse Eisenberg, he has his hits and misses, I am sure we can all agree on that. However, it is much harder for Kristen Stewart to deliver a genuine performance that the audiences love. "American Ultra" follows both of them as they portray a stoner couple on the run from the government, as they uncover secrets about themselves. This picture had the potential to be a lot of fun too, but what do we get? A big messy "comedy" that has far more drama than it needed to. The actors are really just playing themselves as far as their line delivery goes and the plot really doesn't go anywhere new, especially since the opening scene of the film rewinds through the entire film, showing every action beat, which was a really bizarre move. Sometimes a ballsy movie that is just ballsy for no reason can work, as long as the story and script are there to make up for it. This is not that film. Everything about "American Ultra," from it's dumb dialogue, to it's ridiculous story, to it's very unfunny cast, there really is not much to enjoy about this film. I will admit there are some fun action scenes, and the fight scene in the last act was quite a bit of fun, but it is definitely not worth sitting through just for that. "American Ultra" is a film that came out of nowhere that nobody will see, both due to the fact that they had never heard of it, and because it is just not all that good. Definitely does not warrant a recommendation sadly. Just a bunch of wasted talent, that is all it is.