An American Werewolf in Paris1997 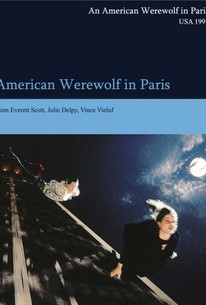 Critics Consensus: Markedly inferior to its cult classic predecessor in every way, An American Werewolf in Paris is felled by the silver bullets of clumsy storytelling and chintzy special effects.

Critics Consensus: Markedly inferior to its cult classic predecessor in every way, An American Werewolf in Paris is felled by the silver bullets of clumsy storytelling and chintzy special effects.

Critic Consensus: Markedly inferior to its cult classic predecessor in every way, An American Werewolf in Paris is felled by the silver bullets of clumsy storytelling and chintzy special effects.

An American Werewolf in Paris Photos

Anthony Waller (Mute Witness) wrote and directed this horror comedy follow-up to An American Werewolf in London (1981) with the focus now on the lycanthropic misadventures of the wolf daughter (Julie Delphy) of the couple (Jenny Agutter, David Naughton) seen in the earlier movie. Filmed in Paris (Louvre, Metro, Seine, and an Eiffel Tower bungee jump) and Luxembourg.

Serge Basso
as Officer with Flashlight

Pierre Bodry
as Waiter on Train

Peter Riemens
as Waiter in Restaurant

Critic Reviews for An American Werewolf in Paris

The computer animation of the monsters here is a herky-jerky cartoon blur that is anything but scary.

...some great films, like sleeping dogs, should be left well alone...

Where's a silver bullet when you really need one?

An exhausting and chaotic pseudo-sequel to John Landis' 1981 horror-comedy classic,An American Werewolf in Paris offers one affront to the senses after another.

Much too lame to be considered a sequel to "An American Werewolf in London."

Put it out of it's misery

If you liked ...London for its wit, chances are this one will fall flat for you as it did for me.

Audience Reviews for An American Werewolf in Paris

Hmmm not too bad, the wolf effects are very poor cgi which makes the wolf look like its sick and losing weight. The gore is great and the concept is OK despite being a complete rerun of the first but its the look and feel of the film which still just about manages to win. The film still has the originals appeal with its kooky black humour and macabre sequences but main lead Scott is a bit weak along with the rest of the cast.

An American Werewolf in Paris is an insult to Jon Landis's landmark film. This film features nothing to redeem it's stupidity. The film is simply a washed out version of Landis' classic Werewolf film. The film has some very bad CGI effects, and it has a terrible cast to act out the dreadful scenes. This is one film that should be avoided, it's not even a decent film. This film is a poor excuse to cash in on An American Werewolf In London, now that was a werewolf picture. This film is pure and simply a travesty and is not worth your hard earned money. They could've done something great maybe if Jon Landis and Rob Baker were involved in the project, but instead they hired a hack of a director to market this brainless piece of crap to a "hip and cool" generation of teens. What a waste of money, and Celluloid, the only way this film could have been great was with a rewrite and Jon Landis helming the project. Nothing new to be found here, just a headache of a film.

Not near as serious as "in London", and had quite a few lame jokes. But in a mood like "The Frighteners" it was horror comedy that you can still enjoy. The monster effects waver from cool to really lame CGI. Worth it if you're feeling really lazy and there is nothing else to watch on your streaming video.

An American Werewolf in Paris has no real connection with it's predecessor. However it does follow the same premise and keeps the interesting mythology it started. Paris may not be as classic as it's dry and bizarre prequel, but it is just as entertaining. The humour is only really littered about the first half, but it is very decent. The werewolves themselves are mostly CGI. Though these effects now look amateurish, they are no worse than the monstrosities that we saw in I Am Legend. The difference being that Paris is over 10 years old. It was actually a brave decision for a technique only just breaking out in movies. The corpses are again the real highlight, it adds to the character dynamics. However I'm not sure they resolved the corpses plot lines in this one. A fun and funny film that is tongue in cheek, but never laughable.

An American Werewolf in Paris Quotes