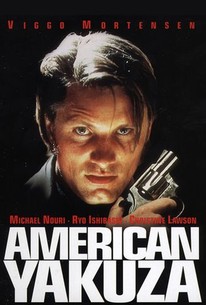 An American FBI agent infiltrates the notorious Japanese yakuza and is forced to choose between old loyalties and his new bond of blood in this lurid crime thriller starring Viggo Mortensen. The first American ever to be accepted into Japan's treacherous criminal underworld, FBI Agent Nick Davis (Mortensen) successfully infiltrates the American arm of the yakuza and quickly rises through the ranks due to his reputation as a skilled assassin. But when Agent Davis is subsequently adopted into the powerful Tendo crime family, his mission is complicated by Italian mob boss Dino Campanela (Michael Nouri) and unpredictable enforcer Vic (Nicky Katt). When crooked and uncompromising FBI task force head Agent Littleman (Robert Forster) sets his sights on Agent Davis, the stage is set for a showdown that will set the criminal underworld ablaze.

Nicky Katt
as Vic
View All

It is is in effect 'The Godfather: the next Generation' - an immigrant saga of family, blood and assimilation that just happens to be set in the world of organised crime.