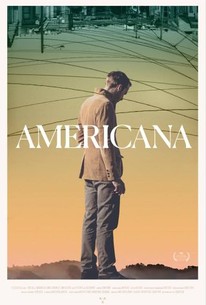 Two years after losing his job as a film editor due to his alcoholism, Avery Wells is pulled back to San Francisco to finish editing a film in which his movie-star sister, Kate, is the lead. Avery's substance abuse and health issues take the back burner, however, after Kate is shot and killed outside a party for the new film. As Avery searches for an answer to why his sister was killed, and as he allows his addiction to cloud his judgment more and more, he begins to realize that his search may just be a reaction to the lies he's told since falling off the wagon.

Although the film is unafraid to go to some very dark places, "Americana" augurs a very bright talent.

Shedd and Foster play with the reality that viewers experience -- a reality that changes right before our eyes. It's almost magical. Unfortunately, the plot twists and turns aren't nearly as effective as the stylistic ones.

There are no featured reviews for Americana at this time.