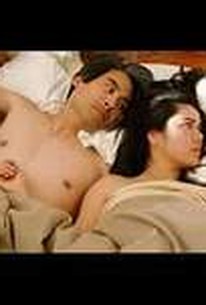 Writer-director Eric Byler adapted his ensemble comedy drama Americanese from Shawn Wong's best-selling 1995 novel, American Knees. The film, like the novel, dramatizes the seriocomic day-to-day experiences of a number of Asian American immigrants in the City of Angels. At the story's center is milquetoast-dull, middle-aged college professor and divorcé Raymond Ding (Chris Tashima) -- so ineffectual that he barely seems to have control over the events that befall him, and so emotionally distant in his relationship with his live-in lover, the Japanese-American photojournalist Aurora (Allison Sie), that his inaccessibility destroys their union. Forced to move out of their house, Raymond instead rooms with his aging father, Wood (Sab Shimono), making periodic, unannounced visits back to Aurora's home when she is absent. While Aurora kindles her own romance with American Steve (Ben Shenkman), Raymond moves into his own apartment and takes up with Vietnamese-American Betty (Joan Chen) -- a university associate plagued by deep-seated emotional and mental problems. ~ Nathan Southern, Rovi

Stephen Bishop
as ''Miles''
View All

Fine, understated performances and the self-assured way that Byler lets the film find its own rhythms, rather than setting into some template, result in a mature film of subtle complexity.

A collection of scenes in search of a coherent story, the film's characters don't develop, and plot lines fail to coalesce by the movie's conclusion.

[Director Eric] Byler deals with characters who have lived their years, learned from them, and try to apply their values to their lives. Their romances are not heedless but wary, and involve a lot of negotiation.

This diverting, occasionally wry seriocomedy ultimately doesn't add up to a satisfying whole.

It's not the glacial pace that fatigues, but a lack of connection with the characters.

Byler doesn't rush his storytelling; this is a deliberately paced, thoughtful meditation on racial issues and relationships ...

I'm convinced that Byler is a talent to watch.

You don't have to be Asian-American to understand the universal longing for love and self-acceptance.

Byler was just warming up with Charlotte Sometimes and somewhere deep down not only gets people - but how filmmaking can translate to those who don't.

There are no featured audience reviews yet. Click the link below to see what others say about Americanese!