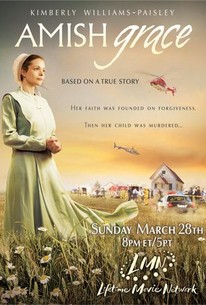 A grieving Amish mother struggles to forgive the woman whose husband killed her daughter and four other innocent schoolchildren in this drama inspired by the tragic true-life events that unfolded in a Nickel Mines schoolhouse on October 2, 2006. It was a senseless crime that no one could have foreseen. In the wake of the shooting, the media descended upon Nickel Mines, and the parents of the murdered schoolchildren remained steadfast in their promise to practice forgiveness -- except for Ida Graber (Kimberly Williams-Paisley). Devastated by the loss of her beloved daughter, Ida found herself unable to forgive the gunman and his wife, Amy Roberts (Tammy Blanchard). With each passing day Ida's sorrow continues to fester, testing her faith in ways that she, and many others in her community, never dreamt of. ~ Jason Buchanan, Rovi

In the end, Amish Grace points quite clearly to the source the real-life Amish families credited for their ability forgive.

Incredibly touching. I only wish I had the ability to forgive like the Amish in this film did.

What a beautiful, moving movie! There are a couple parts that are unbelievable because the Amish simply wouldn't do certain things that they did in the movie but other than that, the story was incredible. I loved the parts about forgiveness and faith. The acting was unbelievably amazing. See this one!

One of the most deeply moving films I've seen in a long time. Although it is not perfect, it moved me to tears almost throughout the whole film. It is partly fiction and partly based on the true story, but either way this was an excellent portrayal movie.