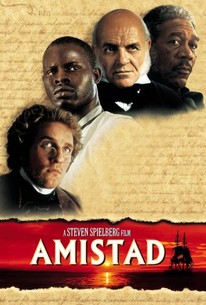 In the summer of 1839, on a stormy night off the coast of Cuba, 53 Africans held captive in the cramped cargo holds of the Spanish slave ship La Amistad break free of their shackles. Led by Cinque, they arm themselves, take control of the ship and reclaim their freedom. They have one goal: to return to Africa. Without the navigational skills to guide them home, the Africans are forced to rely on the two surviving members of the crew. But they are tricked. After two months on a ragged course up the Eastern seaboard, the Amistad is captured by an American naval ship off the coast of Connecticut and the Africans were charged for murder and piracy. In the beginning, the Africans are championed by abolitionists Theodore Joadson and Lewis Tappan, and a young real estate attorney named Roger Baldwin. However, as the case becomes the symbol of a nation divided, two great Americans lock horns in the debate. Pro-slavery President Martin Van Buren, seeking re-election, is willing to sacrifice the Africans to appease the South, as well as Queen Isabella of Spain. But his will is challenged by former President John Quincy Adams, who comes out of retirement to fight the Africans' cause in the United State Supreme Court.

The narrative perils are daunting in this little-known true tale of a bloody slave-ship rebellion in 1839 and its jumbled aftermath in the U.S. judicial system.

In short, a wordy courtroom drama which seldom progresses beyond ciphers, stereotypes and salutary slogans.

In Amistad, an admirable but disappointing effort...[Speilberg] veers between stoic political correctness and mushy Hollywood platitudes.

Spielberg seems to be dividing his filmmaking output into two distinct halves: in the summer months cranking out no-brainer dinosaur flicks...in the winter season unveiling his serious artistic stuff to edify the adults and woo the Oscar crowd.

Brief moments of visceral fire allow glimpses into the rousing movie this could have been.

As Spielberg vehicles go, Amistad -- part mystery, action thriller, courtroom drama, even culture-clash comedy -- lands between the disturbing lyricism of Schindler's List and the storybook artificiality of The Color Purple.

Amistad is certainly a film of considerable power.

Amistad is worth seeing for the stormy scenes on board the slave boat, and for Djimon Hounsou's magnetic performance. Otherwise, it can't decide on its direction, and this unique historical event is stifled into a less than thrilling courtroom drama.

'Amistad' may not be the first, or fifth, or tenth film people talk about when Spielberg's name comes up. But it has more moments that will put your hair on end than other filmmakers' best works, and that says something.

Powerful story for mid-teens and up.

Amistad is worth seeing just for people to know about this important story, this moment in history. But from the world's most powerful, successful and famous director, we expect more.

Aiming to instruct and entertain, and often struggling to reconcile these goals, Amistad lacks the subtlety of tone and simplicity of form that made Schindler's List one of Spielberg's very best; here, however, every idea and image are too explicit.

Authentic but slow moving courtroom drama about slavery in the US. Given the emphasis on wise and humane court decisions it's actually worth revisiting in those dire times. The acting is top notch, espcially Hounsou sticks out in his breakthrough role. There is a sequence in the middle about the treatment of slaves on their way over from africa that belongs to Spielberg's most sickening scenes, up there with the landing in the normandy. At least the satisfying ending makes up for all that rage.

Although technically competent and with wonderful performances by Hopkins and Hounsou (who should have been nominated for an Oscar too), this is a bloated and misstructured film that has an alarming tendency to give in to melodrama and is not as strong as it could be.

More of an interesting history lesson than a compelling film despite good performances.

This is, like a lot of Spielberg, pretty sentimental and schmaltzy, but it had some good intentions, even if the pretentions and pandering can't be totally covered up. I mean, it is Spielberg, so there are great production values, and John Williams has a good score, but the acting and some of the casting just doesn't totally come together for me. I do think this is an alright movie though, even if the story does deserve a better telling.