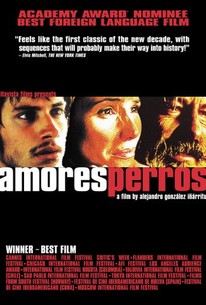 Critics Consensus: The brutality of Amores Perros may be difficult to watch at times, but this intense, gritty film packs a hard wallop.

Critics Consensus: The brutality of Amores Perros may be difficult to watch at times, but this intense, gritty film packs a hard wallop.

Critic Consensus: The brutality of Amores Perros may be difficult to watch at times, but this intense, gritty film packs a hard wallop.

Three stories of life along the margins in Mexico City converge in this inventive thriller. Octavio is sharing an apartment with his brother, which leads to a serious problem when he falls in love with Susanna, his sister-in-law. Octavio and Susanna want to run away together, but Octavio has no money. He does, however, know a man who stages dog fights, and he volunteers his dog Cofi for the next round of fights. Cofi bravely rises to the occasion, but the dog's success in the ring leads to a violent altercation. Elsewhere, Daniel, a successful publishing magnate, leaves his family to take up with a beautiful model, Valeria. Valeria, however, soon loses a leg in an auto accident, and as Daniel tends to her needs, her tiny pet dog gets trapped under the floorboards of their apartment. And finally, El Chivo (Emilio Echeverria) is an elderly homeless man who is trying to contact his daughter, whom he hasn't seen in years. Desperate for money, El Chivo is hired by a businessman to assassinate his partner; however, as he's following his target, he's interrupted by an auto accident, from which Octavio and his injured dog stagger in search of help. Amores Perros (aka Love's a Bitch) was the debut from director Alexandro Gonzalez Inarritu.

Carlos Samperio
as Man at Junkyard

One of the most honored and most expertly articulated Mexican films of recent years.

Recalling Reservoir Dogs and Pulp Fiction - but edgier than both - this is a hell of a first film. For all its bonecrunching savagery, it's also a fundamentally moral work.

It's good and good-looking and features one of the best soundtracks in years ... but it's also slick and schematic, weak on feeling and overly indebted to Tarantino.

Inarritu's talent may be derivative, but it's applied to a setting he knows well and whose vibrancy he's keen to convey.

It's mindboggling to realize this film is Inarritu's directorial debut. A well-constructed non-linear story that unfolds effectively highlighting social-political narratives.

A brutal but worthy motion picture.

A debut in the industry that feels relevant after all these years. This is an epic story of power, poverty, love and guilt. [Full review in Spanish].

It's a breath of fresh air in an industry more accustomed to older narrative and pictorial styles.

Very few films create, as this one succeeds in doing, a fresh and individual sense of a complete world, and allow us to experience this sense as if it were our own.

[Inarritu's] triumph - helped by a cast of unknown actors who more than meet the standards of Hollywood venismo - is to give so lurid a sequence of events the force of reality; and make a story of relentless bleakness, oddly uplifting.

A 'Pulp Fiction'-esque film dealing with several characters and how they are all interconnected amongst the dirty, bleak streets of Mexico City, where dogfighting is common and how a vicious car crash wrecks the lives of those involved. Director Alejandro Gonzalez Inarritu is a very skilled director whose stories are usually intense and very dramatic, and this is as big and successful and opening film as any director out there has ever had. The way he weaves his stories together despite starting them out completely separate from each other, combined with how he paces his film and makes 150 minutes seem like an hour and a half film, is nothing short of incredible. There are a few instances of over-acting and a few questionable turns in the story, but asides from this is an absolutely gripping piece of cinema that must not go unseen.

After a dog-fighter crashes into a supermodel, the film depicts each person's story. Alejandro Gonzalez Inarritu's films never surpassed this, his first effort. An extraordinarily well-told story, Amores Perros reaches the Altman Standard for intersecting stories. Linked by the themes of love and dogs and love of dogs, each story is compelling in its own way, especially the final chapter, which takes advantage of a phenomenal performance by Emilio Echeverria. What I found disappointing was the ending of the second story, which seemed to come to a depressing conclusion without substance. The same can be said of the first story's ending, but the final moments of the film, which conclude the third story, make up for many of the film's deficiencies as a whole. Overall, Amores Perros is a fantastic debut for a rightfully internationally acclaimed filmmaker.

Love's A Bitch is a multi-layered and well-articulated mock to humanity's understanding of loyalty. Violent and profound. Aggressive and cruel. Prodigious.

"Amores Perros" is the mesmerizing directorial debut from Alejandro González Iñárritu. The film is fiercely affecting and involving. Iñárritu's handle over the pacing of his three interlaced short stories is invigorating. The character's in Iñárritu's world only know one currency- violence. No matter if the intentions are good, bad or a combination, each exchange stems from violence. This idea fleshes out the existential aspects of the narrative and adds an almost noirish touch. After all, the world these people inhabit is centerless and out of control, just like any good noir story. For all it's graphic, horrendous violence, "Amores Perros" is an outstanding film that's gripping and thought provoking and well worth serious attention.