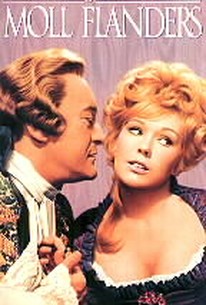 Kim Novak's decolletage, rather than the lady herself, is the true star of The Amorous Adventures of Moll Flanders. This rambunctious filmization of Daniel Defoe's "naughty" novel stars Novak as a poverty-stricken 18th century damsel who rises to the top of society surrendering her virtue--time and time again. After several wealthy patrons and husbands, our heroine finds true love with roguish highwayman Richard Johnson (who briefly became Novak's husband in real life). The film's best moments belong to its largely British supporting cast, especially Leo McKern as a myopic bandit. ~ Hal Erickson, Rovi

Barbara Couper
as The Major's Wife

Anthony Dawson
as Officer of Dragoons

Mary Merrall
as A Lady

David Hutcheson
as A Nobleman, Doctor

Richard Goolden
as The Ordinary

Michael Brennan
as The Turnkey

... the whole picture lacks the feeling for period and social differences that distinguished Tom Jones.

The humor of [Tom Jones] was earthy and natural and uncontrived. The same cannot be said of "Moll" which dwells at length on various stops along the way as the heroine makes her way upward in the world from one bed to another.

Colorful romp with a most fetching Kim in the lead.