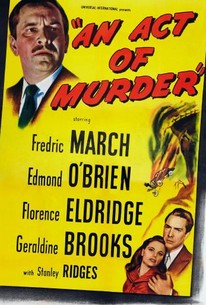 In this provocative drama, a stern hard-liner judge commits euthanasia to save his terminally ill wife from further suffering. He decides to kill her by driving the both of them off a cliff. He succeeds in ending her pain, but unfortunately he survives and ends up turning himself in with a full confession. Now it is up to his brilliant lawyer to defend him. He not only justifies the old judge's actions, he also proves that the wife took a fatal dose of poison before getting in the car; therefore she committed suicide. The judge is freed and returns to his courtroom where he oversees his cases with considerably more sympathy and understanding than he did before. ~ Sandra Brennan, Rovi

Will Wright
as Judge Jim Wilder

Critic Reviews for An Act of Murder

The danger Hollywood faces in dealing with controversial medical subjects is that a film may create exactly the opposite impression it was intended to create, psychologically speaking.

Features its own little noteworthy kernels worthy of admiration.

There are no featured reviews for An Act of Murder at this time.

An Act of Murder Quotes