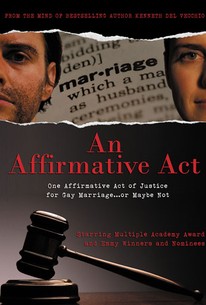 A slice of life of a young, professional married couple with their darling baby turns a sharp, dark corner when the pair are arrested and charged with several counts of fraud. The reason: Terry and Samantha Succi aren't the man and woman that they purported to be. In truth, they are two women. One, a long haired, pretty law professor; the other, a boyish-looking architect, who tricked the world surrounding her into thinking she was a man. Under false pretenses of being a heterosexual couple, they married. Under false pretenses of being a heterosexual couple, they adopted their child. They obtained their benefits and paid their taxes through the same fraudulent pretext of being husband and wife...And they did so because of state law that discriminates against homosexual partners; they were prohibited from receiving the same rights and benefits as their straight counterparts. The Governor, in an effort to protect his politically necessary anti-gay marriage bill, secretly arranges for a quick slap-on-the wrist plea offer that will ensure both a guilty plea and a fast end to the case. Terry and Samantha, though, decide to fight the fight and enlist the unlikely representation of self-absorbed, but respected powerhouse, heterosexual attorney John DeMine. What ensues is a massive media covered courtroom battle, with equally divided views...and equally plotted acts of legal - and illegal - warfare. The women have indeed broken the law. The law indeed discriminates against them. With morals, egos and political control at stake, threats turn into physical attacks. A rogue left-wing group assaults the woman prosecuting the case, followed by a violent invasion into Samantha's and Terry's home by a fringe right-wing outfit. With the case closed to the public, the courtroom becomes a stage of safety - and justice. The arcing of John DeMine's character, the will of the beaten prosecutor and the strength of the charged couple, will influence a jury, perhaps of peers, perhaps not. One affirmative act, deciding not only the fate of the women's freedom, but also the governor's bill and one of the most controversial issues facing the United States, will be had in this courtroom. One affirmative act - of justice, or maybe not. --(c) Official Site

Critic Reviews for An Affirmative Act

The film veers into the narrow channels of the bare-bulb courtroom melodrama and then the rapids of the lurid conspiracy thriller before washing ashore in pieces.

There are no featured reviews for An Affirmative Act at this time.