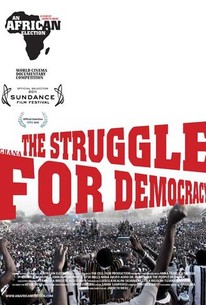 The 2008 presidential elections in Ghana, West Africa, serve as a backdrop for this feature documentary that looks behind-the-scenes at the complex, political machinery of a third world democracy struggling to legitimize itself to its first world contemporaries. At stake in this race are the fates of two political parties that will do almost anything to win. Director Jarreth Merz follows the key players for almost three months to provide an unprecedented insider's view of the political, economic and social forces at work in Ghana. -- (C) Official Site

Critic Reviews for An African Election

As we join throngs of excited citizens at a public vote-counting, their uninhibited zeal for the process only highlights the jaded cynicism that threatens to overwhelm our own.

What makes the film especially resonate now is the frustration with the status quo that is consistently voiced by the people on the street.

The tone is a tad condescending but it's fascinating to learn about the country's colonial past.

Paints a portrait of an engaged, energised electorate, thronging the rallies and queuing for 12 hours straight at the polling stations. It's a good foundation; something to build on.

Timely and balanced, this is a great insight into an otherwise closed process, but would it be more at home on TV?

Occasionally lacking in context but never less than intriguing, Jarreth Merz's polished film is a handy document to a rarely visited democracy.

Director Merz spent his childhood in Ghana, and An African Election feels like a personal love letter to his country, warts and all.

Both topical and apposite, with Merz giving all sides an opportunity.

This skilful narrative documentary vividly captures the urgency of Ghana's precarious 2008 presidential elections. The people are terrific movie characters, and the sense of a nation moving forward is remarkably gripping.

Goes behind the scenes and demonstrates a democracy dangerously on the verge of collapse.

The film team had a gift for being where the electoral action was, and for seeing what was transpiring with an astute eye.

There are no featured reviews for An African Election at this time.