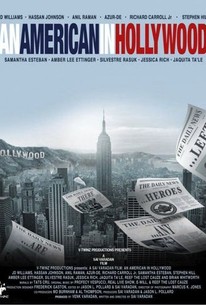 An American in Hollywood Photos

Are there any Heroes left? Hailing from New York City, a talented filmmaker Josiah aka "The Dissenter" (Richard Carroll Jr.) leads childhood friends and fellow artists Dorian and Paul (JD Williams and Hassan Johnson from HBO's hit series "The Wire") to Los Angeles in pursuit of the Hollywood dream. Wielding the artistic powers of writing, directing, acting, stand-up comedy, music, drawing, painting, and graffiti, this team of "Real Artists" battles the "Entertainment Empire" of Hollywood through a humorous and satirical graphic novel animation-based reality. In LA, Josiah meets his match in a beautiful feisty young actress named Ayoka aka "Power Girl" (Azur-De). Backed by her crew of "Bad Girls" (including Amber Lee Ettinger and Samantha Esteban from "Training Day"/"Harsh Times"), Ayoka and Josiah embark on a series of battles as they seek to create and succeed in Hollywood together. But soon... they are confronted by an even deeper obstacle... life. "An American in Hollywood" is a comedic tale of love, brotherhood, talent, betrayal, success, failure, and survival in the Entertainment Industry today. (C) Official Site

Critic Reviews for An American in Hollywood

There's a lot of truth in writer-director Sai Varadan's observant depictions of the battle of the sexes, the East Coast-West Coast cultural clash and struggling artists in soul-crushing showbiz.

Audience Reviews for An American in Hollywood

There are no featured audience reviews yet. Click the link below to see what others say about An American in Hollywood!

An American in Hollywood Quotes