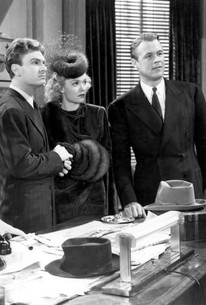 An Angel From Texas Photos

An Angel from Texas was the fourth of five film versions of the venerable George S. Kaufman stage farce +The Butter and Egg Man. The plot remains basically the same, with a wealthy but incredibly naïve young sprout coming to the rescue of a near-bankrupt Broadway musical. This time around, Eddie Albert stars as bumptuous Texan Mr. Colman, who uses his mother's life savings to finance the New York stage debut of his hometown sweetheart Lydia (Rosemary Lane). Fast-talking producers McClure (Wayne Morris) and Allen (Ronald Reagan) persuade Colman to invest his money in their upcoming production, a turgid drama that has all the earmarks of a quick failure. But through a series of wacky complications, many of them engineered by Allen's level-headed wife Marge (played by Reagan's real-life spouse Jane Wyman) the show is transformed into a Hellzapoppin-style surprise hit. Amusingly, reviewers in 1940 referred to Ronald Reagan's comedy style as "conservative"!

Critic Reviews for An Angel From Texas

There are no critic reviews yet for An Angel From Texas. Keep checking Rotten Tomatoes for updates!

There are no featured reviews for An Angel From Texas at this time.

An Angel From Texas Quotes