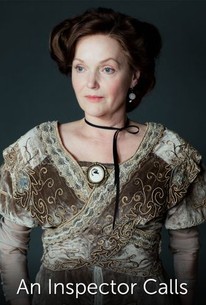 Set in 1912, in an industrial northern town, the taut and ultimately tragic story centers on the prosperous Birling family. Arthur Birling and his wife Sybil are celebrating the engagement of their daughter Sheila to Gerald Croft. But the Birlings' festivities are punctured by a visit from the imposing Inspector Goole, who is investigating the suicide of a former factory worker of Mr. Birling's, Eva Smith. Goole's investigation reveals hidden cruelties lying underneath the Birlings' veneer of hard-won respectability and forces the Birlings to confront the consequences of their thoughtlessness and privilege.

Critic Reviews for An Inspector Calls

It's a sort of Murder On The Orient Express... as threaded through socialist politics, and while it still stands up, and even felt timely, it was the performances that made this special; made you forget the play-ness of it.

This story is thrilling under the direction of Aisling Walsh (Maudie), who brings cinematic quality akin to Downton Abbey and a sharp eye for human behaviour.

Anne Brodie
What She Said
View All Critic Reviews (2)

Audience Reviews for An Inspector Calls

There are no featured audience reviews yet. Click the link below to see what others say about An Inspector Calls!