An Oversimplification Of Her Beauty2013

An Oversimplification Of Her Beauty (2013) 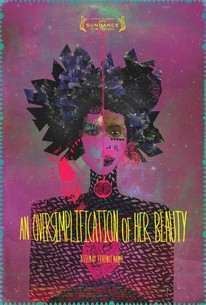 An Oversimplification Of Her Beauty Photos

Executive producers Jay-Z, Dream Hampton, and Wyatt Cenac present Terence Nance's explosively creative debut feature, AN OVERSIMPLIFICATION OF HER BEAUTY. With arresting insight, vulnerability, and a delightful sense of humor, the film documents the relationship between Terence (Nance) and a lovely young woman (Namik Minter) as it teeters on the divide between platonic and romantic. Utilizing a tapestry of live action and multiple styles of animation, the film blurs the line between narrative, documentary, and experimental film as it explores the fantasies, emotions, and memories that race through Terence's mind as he examines and re-examines a singular moment in time. (c) Variance

Namik Minter
as Narrator
View All

News & Interviews for An Oversimplification Of Her Beauty

View All An Oversimplification Of Her Beauty News

Critic Reviews for An Oversimplification Of Her Beauty

This is as fresh as it is self-indulgent, an intelligent piece of navel-gazing. The film loses momentum in the last third, but if this is his calling card, Nance is a young film-maker worth watching.

Not so much a feature film as a series of cinematic doodles and self-reflexive ruminations on the subject of obsessive love.

Hyperbolic adjectives such as dizzying, effervescent, kaleidoscopic and exhilarating spring to mind but don't adequately convey the craft and persistence that have gone into this confessional slice of (semi) non-fiction.

Not a square millimetre of the director's navel is left ungazed at in Terence Nance's film of interviews with a beautiful woman he loves.

The film is annoying at times, hugely inventive at others. The animation sequences are cult-collectable.

A heady mix of fact and fiction, live action and animation, it's an enthralling collage that toys with the fluidity of narrative, experimenting with myriad emotions and ideas.

Whether or not you side with anyone in the film on any of the themes, An Oversimplification of Her Beauty is a solid stroke of inventive creativity and artistic integrity, all buttressed by a profound love and understanding of film.

An Oversimplification of Her Beauty is the rare film that is able to connect on a visceral, emotional level without the benefit of a traditional story.

Audacious, playful and sometimes quite sad. It's also beyond self-indulgent and wears a little thin over the long haul. But still, what a dazzling debut.

Nance dissects himself with candour and self-deprecating charm, ensuring that beneath the experimentation this is deeply relatable.

Audience Reviews for An Oversimplification Of Her Beauty

An Oversimplification Of Her Beauty should perhaps have been retitled "An Overthinking of Her Everything". Developed over the course of six years by writer, director, and star Terence Nance, the aesthetically fluid film is an autobiographical examination of an idyllic relationship he always seems to be on the cusp of, but was never mature enough to handle. Ponderous and ever-present narration (told by The Wire's Reg E. Cathey) informs us that the film will be split into two chapters, and further divided into multiple chapters, embedded within is Nance's 2010 short film, How Would You Feel? If having the film's structure explained sounds like a good way to take the audience right out of the experience, then you'd be right. It shows a lack of trust in the audience and in the clarity of his own story, and that need to excruciatingly detail every aspect kills any personal insights Nance is trying to reflect. Once we get past the unnecessarily complicated intro, Nance's keenly observational exploration of urban relationships, told with seemingly random comic asides and insights, suggest a kinship to the early works of Spike Lee. The first chapter details what appears to be another day, as Nance tries to arrange an evening engagement with the girl of his dreams, Namik Winter, but finding it difficult to do so for one reason or another. The loopy time structure repeatedly folds in on itself, tediously presenting the same scene with new information. Nance has a lot to say about himself, but struggles to get right down to it. When he finally does, it comes out in floods and never stops. An exhausting flow of self-examination is thankfully broken up by truly inventive visuals as Nance switches up the medium at a whim, combining hand drawn animation, claymation, and gritty archival footage. Unquestionably this is one of the most original films of the year, but as Nance continually switches gears and adds more artistic flourishes, he overwhelms us with information in an attempt to make his story unique. Nance bravely presents a "warts and all" version of himself, an immature Bohemian manchild who both pushes the women who love him away, and pines for the ones who show the least interest. Namik gets the better end of the deal as she's the vision of a strong, intelligent, diverse African-American woman. Switching into documentary mode with a heavy reliance on archival footage, we see Nance as he presents a version of the film to a private audience, all without Namik's permission. When he confronts her with it, she expresses displeasure at it the one-sided nature of the story, but she doesn't seem too upset at having her life put on display. In fact, she doesn't really seem to care as much as Nance tries to make it appear, perhaps to try and drum up some tension that is sorely lacking. An Oversimplification Of Her Beauty works as a beautiful visual patchwork quilt, and there's a lot to admire, but it probably would have worked better as a short subject than a feature film.

An Oversimplification Of Her Beauty Quotes