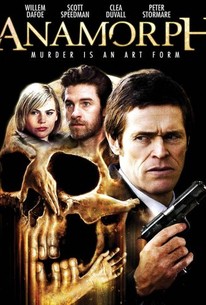 A haunted New York City detective must delve into his dark past in order to stop a serial killer whose highly artistic modus operandi seems uncannily similar to that of a madman who stalked the city streets five years prior. When reclusive detective Stan Aubray (Willem Dafoe) gunned down the man suspected of being the "Uncle Eddie" murderer, he thought his nightmare had come to an end. But now a new crop of victims has begun to turn up, each bearing the distinctive mark of the maniac whom everyone had presumed to be dead. Much like the unfortunate victims of "Uncle Eddie," the bodies in this latest batch have been carefully arranged in a manner that reflects the artistic style known as anamorphosis -- where hidden meanings can be revealed by viewing the crime scenes from different perspectives. Could this be the work of a copycat killer, or is it possible that Detective Aubray and his men killed the wrong man on that fateful day five years ago? All signs indicate that the latest killings were carried out with Detective Aubray specifically in mind, prompting him to reexamine the painful questions that he had struggled all these years to suppress. On one side, Detective Aubray faces the scrutiny of a bright young detective (Scott Speedman) who has his own unique ideas about the killings, and on the other, a disturbed young woman (Clea Duvall) who proves a dangerous link to Detective Aubray's mystery-shrouded past. Only by confronting the possibility that he fears most will Detective Aubray finally be able to overcome his own stifling sense of guilt and finally uncover the truth about the most gruesome crimes ever committed in New York City. ~ Jason Buchanan, Rovi

Virginia Wing
as Board Member

Paul McClure
as Stand in for Mr. Dafoe

Jeff Chena
as Stand in for Mr. Speedman
View All

Director H.S. Miller thinks he's made something broodingly visionary when you're more likely to be aesthetically shaken up by one of Mad magazine's Fold-Ins.

A serial-killer flick told like an art lecture, Anamorph manages to be gruesome yet dull.

The atmosphere created by director H.S. Miller is gothic, tortured, stylized yet tinged with a classicist's sense of composition, symmetry and, yes, perspective.

Wears its influences...a little too heavily on its sleeve. But it does effectively convey a lingering sense of dread that can't be easily dismissed.

The serial killer in Anamorph shows promise, even if some of his best moves are derivative. The same is true of the film's director.

No more interesting than any standard episode of "CSI" or any of the other myriad of cop-centric whodunits polluting our airwaves.

Anamorph dances around ponderous issues and grotesque scenery but fails to really engage, startle or disturb.

A visual treat for Dafoe fans that goes well beyond the conventional horror genre into questions of reality and fantasy and how, or if, we tell the difference.

Sure, it's better than 88 Minutes [what isn't?] but it's still pretty pointless, with unclear exposition and murky plot developments.

i enjoy a good old fashioned detective vs serial killer story but this really does push the line of boredom and stupidity. dafoe has no real plot or character to work with and especially speedman who could have read he's lines minutes before delivering them. this is definitely not the worst detective film but its far from the best

I like a good murder mystery as much as the next person, but this one is hard to watch. I like it when movies let you draw your own conclusions, but in this movie, the leads are just so obscure, and the killer's motives only seems to be to make a confusing movie for the movie-going public out there. Saying that, I probably would watch it again, just to see if it makes sense the second time.

The anamorphic art was nice, but the film itself was a bit too blurry and vague for my taste. Perhaps I should've been more alert to get more out of it.

It's truly a weak, slow and miserable little thriller, the cocept is interesting but the material is weak and dosent deserve the great talents of Willem Dafoe, Scott Speedman and Peter Storemare