Anchorman - The Legend Of Ron Burgundy2004 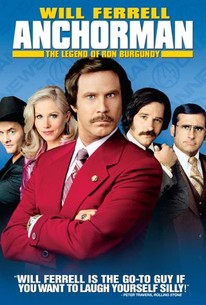 Critics Consensus: Filled with inspired silliness and quotable lines, Anchorman isn't the most consistent comedy in the world, but Will Ferrell's buffoonish central performance helps keep this portrait of a clueless newsman from going off the rails.

Critics Consensus: Filled with inspired silliness and quotable lines, Anchorman isn't the most consistent comedy in the world, but Will Ferrell's buffoonish central performance helps keep this portrait of a clueless newsman from going off the rails.

Critic Consensus: Filled with inspired silliness and quotable lines, Anchorman isn't the most consistent comedy in the world, but Will Ferrell's buffoonish central performance helps keep this portrait of a clueless newsman from going off the rails.

Marking the directorial debut of Adam McKay, former head writer for Saturday Night Live and founder of the Upright Citizen's Brigade, Anchorman is set during the 1970s and stars Will Ferrell as Ron Burgundy, San Diego's top-rated news anchorman. While Burgundy is outwardly willing to adjust to the idea of females in the workplace -- even outside of secretarial positions -- he certainly doesn't want his own job challenged. Keeping that in mind, it's no wonder that the arrival of Veronica Corningstone (Christina Applegate), an aspiring newswoman, is, in Ron's eyes, not the studio's most welcome addition. After Veronica pays her dues covering so-called female-oriented fluff pieces (think cat fashion shows and cooking segments), the ambitious Veronica sets her eyes on the news desk; more specifically, on Ron's seat behind it. Not unpredictably, Ron doesn't take the threat lightly, and it isn't long before the rival newscasters are engaged in a very personal battle of the sexes. Anchorman was co-written by Ferrell, and features supporting performances from David Koechner, Steve Carrell, Paul Rudd, Tara Subkoff, and Maya Rudolph. ~ Tracie Cooper, Rovi

Will Ferrell
as Ron Burgundy

Scot Robinson
as Waiter at Tino's

Peter Hulne
as Man in Kitchen

Critic Reviews for Anchorman - The Legend Of Ron Burgundy

Takes a joke and runs with it -- sometimes too far, but usually long enough to wear you down and force you to submit to its craziness.

Certainly the silliest comedy of the year, but mainly in a good way.

This is ideal Friday night fodder if you're in the right mood.

But it isn't, and instead all we get is a tiredly over-the-top, overly improvised farce that relies more on the popularity of its star than it does on little things like character, story or continuity.

Slaps a goofy smile on your face.

The blooper reel at the end credits proves that this group must have had a grand time making the film - perhaps more than viewers will have watching the finished product.

Absolutely riotous!! Ron Burgundy, the man with a nose for news and one fine looking head of helmet hair. Anchorman - it brings you comedy so you don't have to go find it.

Anchorman: The Legend of Ron Burgundy is one of the best comedies of this century.

He's sure to offend viewers who don't see the humor in such stuff. [But Ron Burgundy] highlights the truth about television news. It's entertainment disguised as information.

Will Ferrell is superb as Ron Burgundy, an egocentric legend of TV's nightly news who could only have existed in the 1970s.

The uneven comedy is sometimes amusing but too often it's a bad joke prolonged.

Audience Reviews for Anchorman - The Legend Of Ron Burgundy

A Solar Car team classic. We quoted this movie wayyyy too many times in Australia "So hot... black [team shirts] was a baad choice!"

While it doesn't really have a well defined plot and feels more like a series of sketches, this turns out not to be a problem, since most of these isolated moments are pretty funny and the excellent cast (including some welcome cameos) nails it with their mostly improvised lines.

Boring. Can't say I made it through.

Starts well but falls apart in the middle, extremely patchy from that point on.