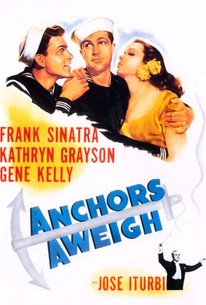 This mammoth musical is at base the story of two sailors on leave in Hollywood. Brash Joseph Brady (Gene Kelly) has promised his shy pal Clarence Doolittle (Frank Sinatra) that he will introduce Clarence to all the glamorous movie starlets whom he allegedly knows so well. Actually, the only actress whom Joseph meets is bit player Susan Abbott (Kathryn Grayson). He arranges for the golden-throated Susan to be auditioned by musician José Iturbi, but when she seems to want to return the favor romantically, Brady tries to foist the girl off on Clarence. But Clarence only has eyes for a fellow Brooklynite (Pamela Britton). Also involved in the plot machinations is runaway orphan Donald Martin (Dean Stockwell). Featuring Kelly dancing with such partners as a cartoon mouse (courtesy of MGM's house animators Bill Hanna and Joseph Barbera), Anchors Aweigh was a huge hit in 1945, assuring audiences future Gene Kelly/Frank Sinatra teamings. ~ Hal Erickson, Rovi

Jose Iturbi
as Himself

Pamela Britton
as Girl from Brooklyn

Eddie Hall
as Sailor
View All

Pretty discouraging... except some excellent dancing by the reliable Gene Kelly.

A very thin story stretched out for over two hours, this is a melange of the wonderful and the pompous.

Another humdinger of a musical.

Thunderously patriotic (the navy is wonderful) and sentimental (kids are wonderful), it's heavily dependent on Kelly's charm and Sinatra's supposed little-boy appeal.

This is a story bursting with light joy... Sinatra and Kelly prove themselves to be an invaluable duo.

Producer Joe Pasternak is not Arthur Freed and director George Sidney is not Minnelli, but this fun and inventive musical, which blends live action and animation, has some good musical numbers, sung by Sinatra and Gene Kelly (who also choreographed).

I absolutely loved this film. It's like musical cotton candy, a feast of great songs and dance numbers and bright colors.

Kelly is perfect as usual, Sinatra is his ideal partner and the plot never gets in the way of the songs.

The only interesting dance number is the one with Jerry the Mouse of Tom & Jerry cartoons. Other than that, it's a predictable romantic comedy.

I'm fully aware that it's kinda cheesy and dated, but you can't beat Sinatra's pipes or Gene Kelly's choreography.

A barely adequate buddy movie that took the minds of the masses off of the war for awhile but is not to be enjoyed for anything more than nostalgia in this era.