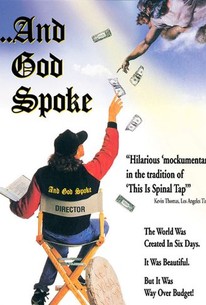 And God Spoke is an occasionally gut-funny spoof of low-budget moviemaking. Producer Steve Rappaport and director Michael Riley have been given carte blanche to make a multimillion-dollar epic based on the Old Testament. One day into production, they blow their budget and are forced to cut corners with a scythe. Rappaport and Riley must now scout about for cheap locations in the LA area, and make do with whatever stars they can afford. The funniest sequences involve Soupy Sales, who has been cast as Moses, crepe beard and all. Lou Ferrigno, Eve Plumb, and film critic Michael Medved (co-author of The 50 Worst Movies of All Time) also have significant cameos in this likeable effort. ~ Hal Erickson, Rovi

Michael A. Saad
as Armond

Michael Medved
as Himself

Anna B. Choi
as Claudia

William A. Tennies
as 3rd Wiseman

Jerry A. Lawson
as 2nd Moviegoer

Peter Cocca
as Eddie
View All

check this one out!

Amusing mock-doc that sends up the self-delusions low-budget directors often force themsleves to labor under.

Mel Gibson should have studied this.

Clever humour, a lack of pretension, and crafty weaving of actual reality throughout the plot delivers a bounty of laughs minus the pandering of mainstream Hollywood satire.

A pretty damn hilarious mockumentary about the pitfalls of filmmaking.

Wonderfully funny Canadian mockumentary chronicles the efforts of two film partners who envision creating the next epic on the scale of The Ten Commandments and instead wind up with a disaster of Biblical proportions! Perfectly inappropriate stunt casting adds to the fun, and the commercial fate of their film delivers one of the most perfectly conceived endings of all time.

Hilarious. One of the first mockumentaries I saw years after Spinal Tap, so it was bound to stand in it's shadow. Years after, now that there are mockumentaries coming out all the time I'm certain this could be looked upon more favourably. Still, a very funny look into a big budget disaster.