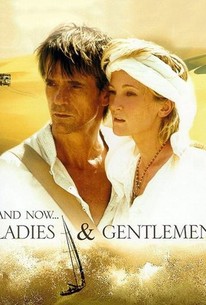 Critics Consensus: The plot is convoluted and awash in suds.

Critics Consensus: The plot is convoluted and awash in suds.

Critic Consensus: The plot is convoluted and awash in suds.

Valentin (also known as And Now...Ladies and Gentleman) is directed by Claude Lelouch and features Jeremy Irons as Valentin, a criminal mastermind whose jewel-stealing business, despite having made him rich, does not offer him much room for personal growth. Hoping to find meaning for his existence, Valentin buys a boat and sets off on a one-man sailing trip around the world, with the police at his heels. At the same time, a burned-out jazz singer named Jane (Patricia Kaas) is in Morocco trying to forget an ill-fated love affair. Valentin, after being struck by a serious illness, makes an emergency landing on the Moroccan coast. Jane soon crosses paths with the suave con artist, and they begin a relationship. Valentin, filmed in France, England, and Morocco, premiered at the Cannes Film Festival in 2002. The supporting cast of Valentin includes Xavier Lecoeur, Romula Walker, and Laura Mayne-Kerbrat.

Daniela Lumbroso
as Herself

Julien Zuccolin
as Himself
View All

A good-looking but slim confection that's short on the multi-characterisation and sense of entwined destinies that mark the great Lelouch sagas.

According to common usage, the French word stupide comes closer to silly than to dumb, which is how I might rationalize my affection for this harebrained, obvious, but euphoric tale.

You'll either like this soaringly daft confection, even as it aggravates you with its self-absorption, or you won't. I did.

The movie is overcrowded with ideas, any one of which might have made a fun premise. Put them all together and the result is just plain silly.

It's two-plus hours of trinkets and baubles and clever repartée beneath a perfect summer sun and beside the whitewashed walls of Fez.

A beautifully crafted meditation on memory, fate, coincidence and yearning.

Lelouch isn't interested in anything so pedestrian as plausible narrative.... some people want to fill the world with silly love songs.

Lelouch's wink at the viewer, his gentle undermining of the illusion of the dramatic unity of time and place, playfully tweaks the film's fundamental project of connection.

Because the majority of scenes are drawn out and obviously improvised, this disjointed and rambling confection will have limited appeal to others.

rambling and far too long

Lelouch ... assuring he doesn't fully lose his audience by the convolutions of the mind, still actively takes part in putting up a fog screen as to avoid total comprehension.

The acting by the cast in "and now... ladies and gentlemen" - both by great actors like Jeremy Irons, as well as others, like Patricia Kaas a famous Jazz singer, is beautiful, very deeply felt. I was moved by the expression in these two actor's eyes. But one mustn't consider and rate acting by itself in Lelouch movies,which I was not familiar with, but it is the unity of all skills and feelings that make his work so profound. The acting, directing, photography, music... they make up the story. This movie is filled with illusions, and incredible photographic beauty, specially the ones in Morocco. A must to see. somehow the Morocco inspector reminds me of the TV serie Inspector Colombo, (funny)