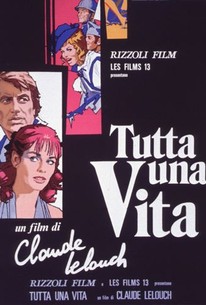 Claude Lelouch's romantic drama Toute une Vie chronicles three different love affairs over three generations during the 20th century. Marthe Keller and Charles Denner portray different members of the families in each of the generations. The stories involve a cameraman's son who suffers and survives internment in a concentration camp in World War II, and his daughter, who marries a man who begins adulthood as an ex-convict and a scoundrel but gradually matures and becomes a well-respected filmmaker living in New York. Each section of the film utilizes a style of filmmaking that is associated with the time period being portrayed. Lelouch earned an Academy Award nomination (along with co-screenwriter Pierre Uytterhoeven) for his screenplay in 1975. ~ Perry Seibert, Rovi

Marthe Keller
as Sarah / Her Mother / Her Grandmother

Gilbert Bécaud
as Himself

Nathalie Courval
as Wife of the Lawyer

Angelo Infanti
as A Stud

Annie Kerani
as A Woman of Simon

Judith Magre
as Wife of the Operator

Gerard Sire
as Director of L'Usine

Harry Walter
as Lover Among Many

News & Interviews for Toute Une Vie (And Now My Love)

View All Toute Une Vie (And Now My Love) News

Critic Reviews for Toute Une Vie (And Now My Love)

Mr. Lelouch, of course, gives amour its due in And Now My Love, but this is not nearly so impressive as his perceptive, often touching portraits of three eras and their principals.

If Lelouch's sensibilities are too flimsy to substantiate his quasi-epic ambitions, the film nevertheless offers some cozy comforts and more than a few inside filmmaking jokes.

A film so sentimental and implausible that its emotional indulgence almost seems avant-garde.

A marvelous, entertaining, panoramic movie unlike anything we have seen before.

[An] energetic, episodic view of three generations of Parisians.

Audience Reviews for Toute Une Vie (And Now My Love)

There are no featured audience reviews yet. Click the link below to see what others say about Toute Une Vie (And Now My Love)!