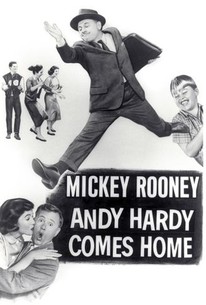 With Andy Hardy Comes Home, Mickey Rooney hoped to revive the character -- and the movie series -- that had brought him fame and fortune back in the 1930s and 1940s. Returning to his home town of Carvel after several years absence, lawyer Andy Hardy (Rooney) brings his wife Jane (Patricia Breslin) and two children Andy Jr. (played by Rooney's real-life son Teddy) and Jimmy (Johnny Weissmuller Jr.) along on his sentimental journey. Andy's dad Judge Hardy is long gone (though the late Lewis Stone appears in flashbacks), but his mom (Fay Holden), sister Marian (Cecilia Parker), and Aunt Milly (Sara Haden) welcome him with open arms. After a while, Andy reveals the real reason for his return: now in the employ of an aircraft company, he hopes to convince his bosses to build a plant in Carvel. The fly in the ointment is crooked businessman Chandler (Frank Ferguson), who, when Andy refuses to purchese Chandler's land at a ridiculously exorbitant price, mounts a campaign to discredit the Hardy family. A pleasant enough diversion, Andy Hardy Comes Home failed to spark interest in a new Hardy Family series. ~ Hal Erickson, Rovi

This ultra-folksy Hollywood domestic comedy is definitely not of Best Bet calibre in my ratings, its only priority being alphabetical.

There are no featured reviews for Andy Hardy Comes Home at this time.