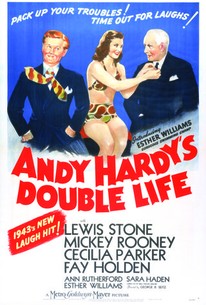 Incredible as it may seem, rambunctious 18-year-old Andy Hardy (Mickey Rooney) finally makes it to college in Andy Hardy's Double Life. Just as he did at Carvel High School, Andy majors in "girls" at college, at one point finding himself engaged simultaneously to two different coeds. On a more serious note, Andy has his first major row with his father Judge Hardy (Lewis Stone) over such vital matters as money and poor grades. But in keeping with the "honor thy parents" edicts of MGM head-man Louis B. Mayer, the plot manages to reunite father and son in the final footage, with Andy respectfully bowing to the wisdom of the good gray judge. Much of Andy Hardy's Double Life is a showcase for MGM's new swimming star Esther Williams, as cute as all get out in a two-piece bathing suit.

Robert Blake
as Tooky
View All

There are no critic reviews yet for Andy Hardy's Double Life. Keep checking Rotten Tomatoes for updates!

There are no featured reviews for Andy Hardy's Double Life at this time.