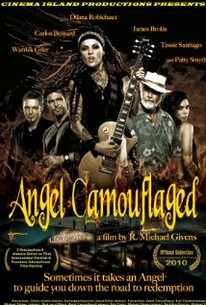 This rock and roll drama stars, James Brolin, Carlos Bernard, Tessie Santiago, The Marshall Tucker Band, Kurtis Blow, Patty Smyth and the rock and roll sensation from South Africa that lit up the screen on Rockstar Supernova, Dilana. When rock star sensation, Scottie B., falls prey to the demons of fame, she escapes the music scene only to find herself face to face with her destiny once again and even greater challenges when she inherits a little bar that was once owned by a woman with the same spirit and voice of an angel. This exciting rock and roll adventure shot was in the desert of California and the low country of South Carolina. Angel Camouflaged is the journey of SCOTTIE, a rock and roll singer whose struggle with substance abuse causes her music career to implode. Scottie bails on her manager/brother, MORGAN, to hide out in the Mojave Desert. Her peaceful new life is disturbed when Morgan calls and tells her that they inherited a bar in far-off South Carolina. Scottie is hesitant to take Morgan up on the offer, but tragedy once again plays his heartless hand and changes Scottie's mind and circumstances. Scottie hits the road with nothing but her tears and her guitar. When she finally sees the bar, she's horrified, the place is completely in shambles. Scottie and Morgan find themselves in a hostile world of raging motorcycle clubs, gun toting gang bangers, a satanic flesh merchant and a deadly neighbor who is hell bent on sabotaging their efforts to survive. Drowning in a sea of despair, Scottie learns from her departed aunt to see her true spirit and rise above her tribulations and fight the demons bent on her destruction. This film is rock and roll music, it's old west-style bar fights with a little Southern Mysticism mixed in. It's a wild, emotional adventure about the will of a brother and sister who find the strength to overcome seemingly insurmountable odds.

There are no critic reviews yet for Angel Camouflaged. Keep checking Rotten Tomatoes for updates!

There are no featured reviews for Angel Camouflaged at this time.