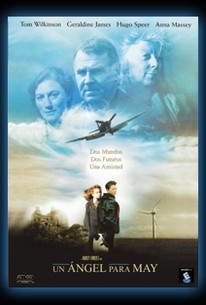 Directed by Harley Cokliss, An Angel for May follows a modern boy (Matthew Beard) living in Yorkshire, England, and his dog, who cross through a brick wall leading directly into the early 1940's. Tom (Beard) looks very strange to Sam Wheeler (Tom Wilkinson), who owns the property which Tom managed to land on. Sam, who lives with his adult daughter, Alison (Julie Cox), also provides shelter for a traumatized waif named May (Charlotte Wakefiled). May, who had been buried under the rubble when her entire family was killed in a bombing raid, sleeps with the dog outside and refuses to come inside the house even for meals. However, after she spends some time with Tom, she quickly progresses. Tom, meanwhile, is intent on finding his way back to the future. However, once he gets there, he realizes that he left something very important back in the past. ~ Tracie Cooper, Rovi

Charlotte Wakefield
as May

Critic Reviews for An Angel for May

There are no critic reviews yet for An Angel for May. Keep checking Rotten Tomatoes for updates!

Audience Reviews for An Angel for May

There are no featured audience reviews yet. Click the link below to see what others say about An Angel for May!

An Angel for May Quotes